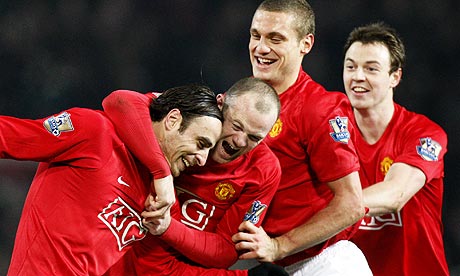 The Clash recorded this iconic hit in 1981. Ironically, the year Mr Berbatov was born.

Our £30.75m Number 9 looked set to be leaving the club after the Champions League Final defeat against Barcelona at the end of May. Having been left out of the match squad, rumours swamped the internet that he’d left Wembley early and was angry and upset with Fergie, and with the club as a whole. Rumours later denied by both club and player.

After the emergence of Chicharito, and the impeccable form of Wayne Rooney, who could blame Sir Alex in leaving him out the final few games of the season? Certainly against Barca – the pace of our front men was one of the only positives we could have taken from the night.

But Berba looked set to stay, after ‘pledging his future to the club’ earlier in the summer – usually the Kiss of Death for any player. His agent seems to know more than he does most of the time, which doesn’t seem right for a man clearly unsettled from the team he longed to play for.

However, reports in the papers over the last week seem to contradict that. Even this morning, the strongest rumour yet of a move to a revitalised Paris Saint-Germain seems on the cards. An opening offer of £10m will be turned down, but what happens if they offer more?

In the last few moments, we’re seeing reports of United and PSG agreeing a fee – presumably more than the £10m reported. But what does it mean for Berba? What does he have to choose between?

In realistic terms, should the form of Chicharito and Rooney continue, Michael Owen remains injury-free, and Danny Welbeck continues to improve at a rate of knots, Berba will find it tough to be starting a game against big clubs. But, after Scholesy’s retirement, there is now no-one left at the club who can do what he can – link up play.

If Berbatov was a central midfielder, he would be one of the best in the world – his skill, first touch, and ability to pass the ball in ways never seen before are second to none. But the fact he’s a striker, who in his first few seasons didn’t tend to score too often didn’t exactly advocate him to the fans. There isn’t another player like him at Manchester United, let alone the Premier League.

He will score goals, providing you build the right team around him. look what happened against Blackburn and Liverpool last season! We stuck him up top, played Wayne and Chicharito off him, as opposed to with him, and suddenly he had the freedom to stick the ball in the net and create chances. He’s still one of the best centre forwards in Europe.

At the end of the day, his contract runs out at the end of next season, so Fergie may find it best to cash in now. He knows all, remember. But expect backlash from United stalwarts – the majority want to see Dimitar stay a Red for as long as possible, and appreciate the skills he offers to our great club.