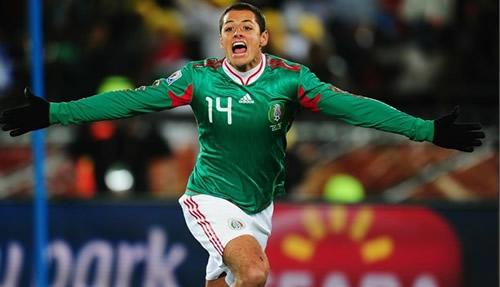 After an incredible debut season for United netting 20 goals in all competitions , Javier Hernandez looks to continue this trend come next term. Hernandez is on another goal scoring tear at the CONCACAF Gold Cup. With six goals from 4 matches, Hernandez is proving that he has grown as a player and is just plain lethal in front of goal. Concerns over burnout seem to fade with each minute he plays.

Hernandez quickly adapted to life and football in England, and soon we relied on his movement and abilities to create goal scoring opportunities. Everyone from opposing managers to players to commentators made reference to his ability to move off of the ball.

However it is not just his effort that has endeared him to the United faithful. It is is loyalty.

“Our team has such soul and such spirit. Success is written into the DNA of this club. I’m at the best club in the world. Thanks to my team-mates, I could express myself freely on the pitch. I think it was the pivotal game in my season. I will remember it all my life.”

His passion is exhibited in the way he plays, his loyalty is seen in the kissing of the badge, and his love for the game is written all over his face in every celebration, and not just for his own tallies.

What was his goal for his first season?

“Basically, the aim for the season was essentially to adapt to the Premier League, especially physically. But gradually I got playing time, and I started to feel confident, scoring a few goals early in the season. Everything was so fast. I could not have hoped for it. I had a dream season.”

We all had a dream season. As for next season? Hernandez says to expect more of the same.

“Personally, I am extremely happy with my season, but I do not rest on my laurels. I want to do even better next season. I want to help this club to make history.”