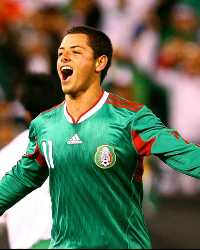 Manchester United striker, Javier Hernandez scored the first hat-trick for Mexico in a Gold Cup match since Luis Miguel Salvador did it on July 22, 1993, against Jamaica.

Javier ‘Chicharito’ Hernandez scored three times Sunday night for Mexico as they skipped past El Salvador in the opening match for both teams at the CONCACAF Gold Cup. The game finished El Salvador 0-5 Mexico, so the little pea’s goals were more than enough.

“The most important thing is we got the three points, not the hat trick” Hernandez said.

The 23-year-old’s first goal came in the 60th minutes from a header. Efrain Juarez set up the goal for Hernandez from a corner kick taken on the left side.

He got his second goal just seven minutes later after placing a shot from inside 10 yards – that was Mexico’s fourth goal of the night.

My favorite goal was his last, the penalty, Mexico’s fifth. He stood up in front of 80,000 Mexican fans and took it from the spot, before chipping it into the right corner of the net. Hernandez won the penalty after Marvin Gonzalez took him down recklessly inside the box. The Águila defender also received a red card.

“It’s unbelievable the support we have from the Mexicans we have that live here. You can see it with your own eyes,” Hernandez said, “80,000 people and most of them in green shirts.”