This is part two of Stretty News’ review of the United season. Part One can be found here.

Wayne Rooney was back in the fold after a brief flirtation with alternative career options but the goals didn’t come immediately. United fans, who had been put through the wringer by the Scouser’s shenanigans, were unhappy not to see an immediate return on the club’s increased investment. Instead, a recurrence of his disputed ankle injury saw Roo off to the Nike sports facility in Oregon to ‘rehabilitate’.

It wouldn’t be until late in the season that Rooney began to find the target. In the interim, however, he did manage to forge strong partnerships with both Dimitar Berbatov and Javier Hernandez. In the early going, both players were displaying torrid form in front of goal.

For the Bulgarian, it was hit or miss, with long stretches of errantry broken by two hat-tricks, against Liverpool and Birmingham, a brace versus Blackpool and a tremendous five-goal haul at the expense of Blackburn Rovers. However, despite sharing the Golden Boot with City’s Carlos Tevez, on twenty goals apiece, Berba failed to score in twenty-one of thirty-two starts and struck only twice in ten substitute appearances.

The disparity in performance led to a constant outcry for Fergie to play Hernandez ahead of Berbatov. Chicharito was scoring regularly and looked to be working much harder. Despite typically coming on after the hour, he hit in nine of his nineteen relief appearances. As a starter, he wasn’t as efficient, finding goal in just nine of twenty-four matches. Yet, that was more consistent than Berbatov and the Mexican’s three doubles brought his tally level with the Bulgarian in all competitions. The Scot would justify his selection of Berbatov in the press for the greater part of the year before relenting late on, only for his reversal to spark more debate.

While the argument raged over who was the better goalscorer between Chicharito and Berba, the man who had been expected to continue on in that role, from the previous campaign, found his re-emergence challenged by another injury. This time, though, it wasn’t his own. 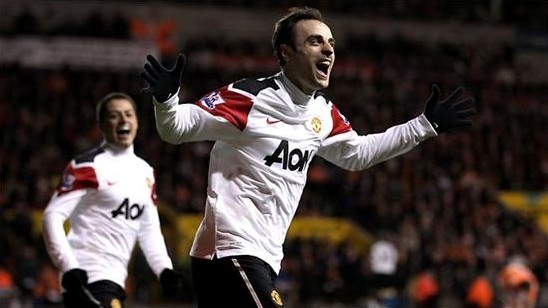 On a chilly autumn night in Glasgow, Antonio Valencia, Wayne Rooney’s most reliable source of service went down badly under a fair challenge from horrified Gers fullback Kirk Broadfoot. A broken ankle ruled the Ecuadorian out of the meat of the season and Fergie was hard put to find a suitable replacement. After giving Gabriel Obertan a long look and experimenting with Ryan Giggs and Park Ji-Sung, the gaffer finally moved Nani over to his preferred side, where he put in a yeoman effort, scoring a handful of big goals and setting up several more. 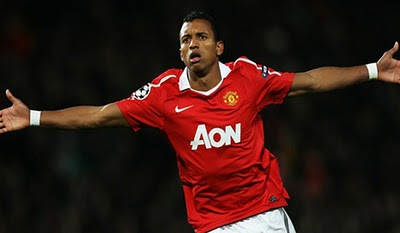 As Sir Alex puzzled over how best to deal with the loss of Valencia, news broke that the secretive Glazers were set to repay the most taxing of the loans which had been eating into United’s profits, aka payment-in kind or PIK debt. It was a commitment to the club in the neighbourhood of £220 million and removed the skyrocketing interest payments which were thought to be handicapping the club, although the lack of details regarding the source of the payments irked both the media and members of the Red Knights supporters’ trust, which had seen a bid for the club ignored by the American owners.

Their suspicions were to be expected, as the term is supporters’ trust and does imply an inherent lack of faith for those whose hands are on the tiller – and in the till. Even a financially impeccable club like Arsenal has such an organisation, yet Fergie was still inundated with questions about whether he would be given money to spend in January.

Traditionally reluctant to speculate in the winter window, Ferguson indicated his lack of interest, while offering his continued endorsement to owners who had remained entirely in the background since their arrival, allowing him a free hand and supplying whatever he, rather than the media or fans, deemed necessary.

After the good news on the financial front, November ended with a sickening thud on the pitch in London’s Upton Park. West Ham exploited a weak United line-up for four goals, through a pair of doubles from Carlton Cole and former United player Jonathan Spector, to dump the holders out of the Carling Cup competition. For Avram Grant and West Ham, struggling at the bottom of the table, it had to be the highlight of their season and they would venture all the way to the semi-finals in the tournament on the back of that triumph. For United, it would be the first defeat of any kind on the year but was quickly forgotten, when it was succeeded by a 1-0 victory over Arsenal in the league, a fortnight later.

The Holidays, apart from a late concession at St. Andrews which cost United two more points, was actually rather pleasant. Back atop the table, having put the Gunners in their place while Chelsea continued to sink after the dismissal of bench coach Ray Wilkins and a comprehensive defeat at Anfield, the manager’s worst problem was answering endless questions as to whether his side could match the Invincible Arsenal of 2004. Life was good and problems seemed to be resolving themselves.

January brought new challenges, however. While United and Arsenal stood pat, Man City, Chelsea and Liverpool all looked to take advantage and close the gap at the top.

City signed Edin Dzeko for £27 million, which put the moody Carlos Tevez back into a snit. The former Red had threatened to leave the club over Christmas but had been cajoled into remaining at Eastlands by Roberto Mancini. The sudden competition for playing time soon had the disgruntled Argentine rethinking his capitulation, though. After all, it was bad enough to be left out in the cold by Sergio Batista as the Albiceleste prepared for the Copa America. To be idle in cold damp Inglaterra, as well, especially without a snood, was the height of insult!

As that development unfolded at one end of the East Lancs Road, Liverpool’s new American owners announced that Roy Hodgson had utilised as much rope as they could afford to give him at the other. His remarks to the Kop, to either support the club or be quiet, knotted the noose which hung him. In the eyes of John Henry, who was very sensitive to the feelings of Reds supporters after the disastrous tenure of Hicks & Gillet, that was simply carrying matters too far.

None of the transfer baubles made an impact comparable to their high price tags, although Suarez certainly fit right in at Anfield, even if the goals didn’t come. Carroll was injured but when healthy was water to the oil of Dalglish’s pass and move system. Dzeko managed a goal or two but never really carved himself a space in Millionaire’s Row. Torres, of course, only managed to cost Carlo Ancelotti his job, registering just a single goal in his nearly four months at Stamford Bridge, despite being started in favour of a frustrated Didier Drogba and Nicolas Anelka.

Still, both Liverpool and Chelsea moved up the standings, with the latter forcing a late season showdown at Old Trafford to decide the title despite being eleven points in arrears at the beginning of the new year. That match was yet to come, however. First, United would have to lose both a club icon and a Premier League game.

Here ends part two of our United season review. Catch the third and final part in this space tomorrow.