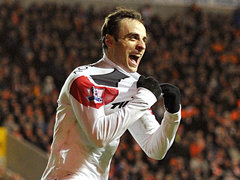 Last season’s top goalscorer Dimitar Berbatov (20 goals) insists he will be at United for another year, putting speculation about a move away from Old Trafford to bed.

The former Bulgaria captain had an interview with 24 Chassa daily this week and confirmed he is determined to fight for his place at Manchester United.

Berba’s contact is set to expire next year and he wants to fulfill it, “I’m a Manchester United player and will be glad to fulfill my contract.”

In the same interview, Berbatov also denied reports that he left Wembley Stadium before the Champions League final kicked off, and he admitted to watching it on a television in the dressing room.

“I was just disappointed and ashamed that I was left out of the squad. Because I can’t hide my emotions, I didn’t want people to see how sad I was,” Berbatov said.

Berbatov then said a few words about Ferguson’s decision to drop him from the squad. He felt “very disappointed” and “it hurt me a lot,” but he still has respect for the manager and club.

“I’m very proud of this. I came to England from a little country and I know that during every training session, during every game I have to be better that the others because I’m a foreigner,” he said.

“Manchester United is the highest step for me,” followed, pointing out that everything after that would be a step down.

“Of course, this moment will come but for the time being I want to stay with Manchester United and help my team win the 20th title, which I’m sure is on its way.”