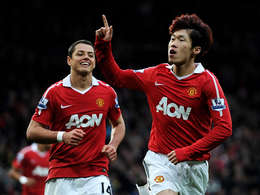 Park Ji-Sung will follow Michael Owen’s footsteps and extend his contract with Manchester United this summer, according to The Telegraph.

The South-Korean midfielder signed for Manchester United from Dutch side PSV Eindhoven in July 2005, for a fee of around £4million. Since joining, he has become favorite with the fans mainly because of his work rate. Park refuses to give up, that’s why Ferguson decided to sign him six-years-ago.

Park’s current contract will expire in June 2012, and by the looks of things, Manchester United are trying to get all the contracts out of the way before they hit the market looking for players to improve the squad – “busy summer” ahead according to the club’s chief executive, David Gill.

The news that Park will be putting pen to paper to stay at United for another few years certainly puts a smile on my face. The 30-year-old played an important role for United this year. He made a total of 28 appearances while scoring 8 goals, including those memorable strikes against rivals Arsenal (Premier League) and Chelsea (Champions League).

“Manchester United are an important club and I am happy if I’m seen as an important part of the club,” said Park.

“In football anything can happen, but I’ve been here six years and I like this club.”