This morning I woke up to a surprise, Sir Alex Ferguson handed Michael Owen a one-year contract extension that he agreed, and with Danny Welbeck coming back from a loan spell at Sunderland I thought Owen’s days at Manchester United were coming to an end. But I am happy to see he’s staying at United.

After being overshadowed last season by Javier Hernandez, I was expecting to hear the former England star would be released like Owen Hargreaves. But he’s a fantastic role model to have at the club, a proper gentleman to say the least.

Ferguson still sees the 31-year-old as an important member of his current squad: “Michael has proved to be a top footballer,” said the Manchester United boss.

“It is unfortunate that he did not get more opportunities but the form of Chicharito (Hernandez) put everyone in the shade and his partnership with Rooney proved invaluable. I am delighted Michael is staying for a further year and we will look to give him more opportunities in the new season.”

Despite not getting as many ‘opportunities’ this season, Michael Owen picked up his first league medal and scored at Old Trafford on the last day of the Premier League for United in their record-breaking season; knocking Liverpool (his former club) of their perch, becoming the most decorated club in English football. 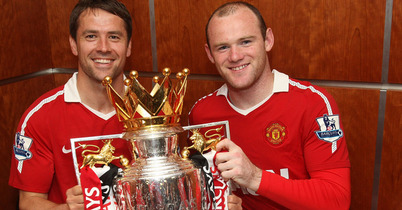 Owen and Rooney with our (Premier League) trophy. Courtesy of TeamTalk.com.

Owen earned a place on the bench ahead of the Premier League Golden Boot winner, Dimitar Berbatov Saturday night for the Champions League final. Ferguson’s decision raised many eyebrows (probably Carlo Ancelltii’s too) and Berbatov’s future at the club has immediately been put into question. However, Micky Owen did not play in United’s 3-1 defeat against Barcelona.

“I am delighted to have agreed a one-year extension to my contract,” said Owen.

“To play alongside so many great players, under an exceptional manager, and in front of so many passionate supporters is a real inspiration. I can’t wait for next season to start.”

Now, I expect United to sell one or two of their other six strikers; Rooney, Hernandez, Berbatov, Welbeck, Diouf or Macheda this summer. If they sell one of them, who will it be? Time will tell.