It looks like Sir Alex Ferguson will be giving a number of Manchester United’s young prospects a good run next season after discovering Barcelona hold a huge advantage over English clubs – a much stronger youth system.

The La Liga champions won their fourth European Cup Saturday night at the expense of Manchester United, for the second time in the space of three years. They skipped past the Premier League champions in a 3-1 win at Wembley but there was little to complain about on our behalf, they were simply too good.

Barcelona, like Ajax, are known for their extraordinary youth system. Pep Guardiola’s current team proves how good it is with seven home-grown players, including Lionel Messi, Andres intesta and Xavi. But the club can only thank themselves.

In 1979 the Catalans converted an ancient country residence, called La Masia, into a dormitory for young players from outside of Barcelona to improve their skills etc. It’s said that La Masia holds over 300 youngsters; some of them had to leave their families with the ambition of becoming the world’s next big thing in the beautiful game.

La Masia have a page on Barcelona’s official website – here’s how they describe the project:

La Masia, located next to the stadium, is the heart of the Barça youth system. This emblematic building forms part of the history and heritage of Futbol Club Barcelona, and is an ancient country residence built in 1702.

At first, La Masia was used as the workshop in which the architects and builders of the Camp Nou modelled their project, and was the starting point for VIP visitors and collaborators in the construction work. Once FC Barcelonas stadium was inaugurated, on September 24, 1957, the doors of La Masia were closed until a new use could be found for it. Under the presidency of Enric Llaudet, the building was remodelled and extended for use as the clubs social headquarters, which had formerly been located on a different site in Via Laietana. The new social headquarters were opened on September 26, 1966.

In 1979 it became a holl of residence

As the club grew and different offices were established, it became apparent that La Masia was no longer big enough, and under Agustí Montal, they were moved to the area now next to the ice rink. So, La Masia was once again disused until Josep Lluís Núñez assumed the presidency and immediately found a new purpose for the building: La Masia became the residence of young players from outside of Barcelona. The renovation work was done quickly, and on October 20, 1979 it was officially declared ready for use.

A group of young players with a bright future

This residence is now used to develop the young players that have had to leave their families in order to train at FC Barcelona both in a sporting and intellectual sense. In the clubs centenary year, La Masia celebrated its twentieth anniversary and the general feedback has been very positive. Several youngsters that had lived at La Masia have gone on to play for the first team, including Amor, Guardiola, Sergi, De la Peña, Puyol, Xavi, Reina, Víctor Valdés, Gabri and Messi, as well a large number of players that have gone on to play for other Spanish clubs. So successful has it all been that many people now simply use the name La Masia to refer to Barças youth players in general.
But the players residing at La Masia are not only limited to those from Catalonia or the rest of the state. There are also numerous young players from other countries.

La Masia consists of two floors and a few attics, measuring 610 m2. It houses 60 boys (12 sleep at La Masia itself and another 48 in other rooms situated around the stadium). It has a kitchen, dining room, living room, library, office, bathrooms, showers and four large dormitories with dressing rooms.

Apparently the Premier League have plans to restructure the entire youth coaching system, which would give 10-18 year-olds three times as long on the training pitch with qualified football coaches teaching them the basics – something that a lot of the players in our league don’t understand…

And Ferguson, who watched his team be out-classed by Barcelona last weekend insists that the restructure cannot come quick enough for English football. The boss, like myself, obviously doesn’t want to see the Premier League fall behind in class. Exactly like parents and their children in school.

“We are only allowed to coach [schoolboys] for an hour and a half [each week]. Barcelona can coach every hour of the day if they want and that’s the great advantage they have got. You can see their philosophy through that,” Ferguson said.

“It’s a fantastic philosophy and we hope that, in years to come, we have more time with young players, to teach them the basics, the technical ability and to have the confidence to take the ball all the time. We’re good at that, but we’re not as good as Barcelona at this moment in time. It’s a wonderful challenge and we can always accept a challenge.”

The current Academy regulations are understood that youngsters under the age of 21 can only receive 3,760 hours on the training pitch. If you’re a fan of Spanish football and watch some of the smaller teams play, you would have noticed how better they play than the likes of Stoke City, who reached the FA Cup Final this season. A lot of the youngsters that grew up in La Masia obviously didn’t make it at Barcelona, a number of them moved to smaller clubs in Spain and other countries.

But it is important to remember our youth system too, as there’s a lot to look forward to! This season I started watching the reserves and youths and extremely enjoyed it, growing an even bigger obsession with United… How that’s possible, I do not know.

Nowadays when I think about the youth at Manchester United names like Ryan Tunnicliffe, Paul Pogba and Ravel Morrison come to my mind. There’s others too but these three I expect to see a lot of next season, whether it’s loan spells at different clubs or just cup experience. Plus Tom Cleverley, who will be coming back from Wigan Athletic this summer after spending the season with them. 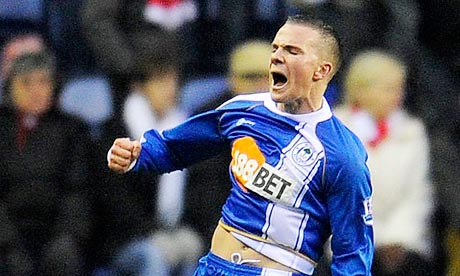 One of the players I thought stood out last summer when United traveled to America on their pre-season tour.