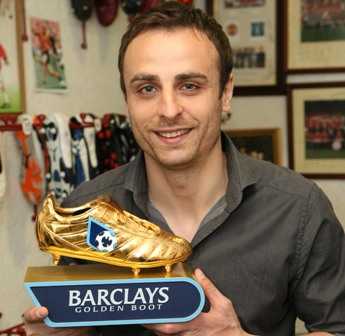 Congratulations to our number nine, Dimitar Berbatov for becoming joint top scorer in the Premier League this season with 20 goals. Manchester City’s former Red Carlos Tevez shared the not so individual award, meaning both will receive the Barclays Golden boot trophy and will be given £20,000 each to donate to a charity of their choice.

However, Berbatov has a more impressive stat – all of his goals were scored from open play unlike Tevez.

4 responses to “Photo: Berbatov and the Golden Boot trophy”