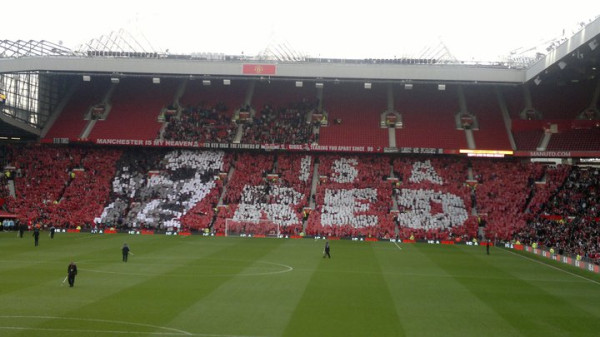 A fantastic mosaic made by Stretford End Flags for Gary Neville’s testimonial.

We would like to welcome Tom to StrettyNews.com. This is first article for us – follow him on twitter if you want to read more from him.

Last night Manchester United and Juventus battled it out in which I thought was a high tempo Testimonial Friendly for the legend Gary Neville. More than 40,000 fans came to give the loyal fullback an emotional send off. Although, this was a night for the United skipper, it was still exciting to see several faces in the starting line up from the class of 92.’

Tomasz Kuszczak made the start in goal with Wes Brown and John O’Shea in front of him at the centre of defence. Gary Neville captained the reds for the last time at right-back whilst his brother Phil Neville found himself at left-back. An aged but experienced and legendary midfield lined up. United fans were able to welcome back players that names get chanted week in week out without presence. David Beckham made a return on the right wing, with Ryan Giggs positioned on the opposite side taking the left flank. Paul Scholes and Nicky Nicky Butt took control of the middle of the pitch, leaving Rooney and Michael Owen to pair upfront.

Gary Neville made his way out onto the pitch as the players lined up and fans stood to applaud the legend as he came through the tunnel at the Theatre Of Dreams for the last time as a player. He was followed by Ian Brown singing the famous tune ‘This Is The One.’ Before Kick off the skipper was presented with a framed painting and marble trophy for his many years of service and loyalty to the club he loves, which was then followed by an emotional few words from the gaffer, Sir Alex Ferguson.

United made a great start to the game with a flowing move which nearly resulted in a goal in the first few minutes only to have Wazza’s effort saved which was set up by Phil Neville, who had a lot to joke about before the match calling Gary a knob on live television, “brothers can just about get away with saying that,” said Jeff Stelling.

Another legend, David Beckham, seemed to be playing a lot deeper than usual as Gary Nev started extremely confident flying up the right flank showing his eager to get a chance at goal. His over lapping runs past Becks, reminding the crowd of how the pair used to play together.

It was Gary Neville’s reds that got off the mark in the 18th minute with an inside of the foot finish from Rooney. A lovely move from the home side in which saw Becks, Scholes and Owen all have a part in, finishing with a superb assist from Ryan Giggs for Wazza to tap in.

The skipper continued to race up the right flank managing to get a few crosses in, one of which was a precise cross to Michael Owen who took it on his head only to see it go wide. Gary also shown the 40,000 fans that he still has the brilliant positional sense he has always had, with several excellent defending headers to guide the ball away from danger.

30 minutes into the game Rooney, Scholse and Giggs had played their part, congratulating the skipper and being substituted with the big game on Saturday in mind. In their place Gabriel Obertan, Darron Gibson and Bebe came onto the pitch to take part in the special night. It was soon after this on the 39th minute that Juve pulled a goal back to level the score with a close range header from Simone Pepe. However United hit back immediately with a great ball from Becks down the right flank for Gary Neville to chase and head down for Bebe to put the ball in for Owen who could only smash the ball wide. The second half came to an end with a long range effort from Becks for the Juve keeper to deny. Great first half which consisted of several runs down the right flank, brilliant defending contributions and a lot of heavy breathing off the main man. Not to mention the superb silky step overs from brother Phil Neville…

There was one substitute made during the half time period, Kuszczak was replaced by Anders Lindegaard in goal. First chance of the game for United was a famous David Beckham free kick. Which before being taken Becks jokingly tried to persuade the skipper to take himself although Gary’s response was just a laugh! Unfortunately we could only see the free kick just go over the bar, leaving the skipper to be thinking that maybe he should have taken it.

On the 78th minute Juve went in front with Giandonato’s free kick. Although this did not spoil the special evening, with fans still upbeat and enjoying the passion and emotion of the whole event. Shortly after it was time to say farewell to one of the best full backs United have produced. Over 40,000 Reds took to their feet to applaud and thank the passionate player and fan for his many years of service and loyalty to the club. Scott Wootton came on to replace him to make his senior debut, along side Rafael and Anderson who replaced Owen and O’Shea.

Laughter was made towards the end when a young fan, well a child, came running towards Beckham. Becks was able to hold onto the fan as the 5 fully grown security men caught up in which Beckham could then only look confused as they escorting the young fan out of the ground.

However, that little boy’s minute of fame was forgotten within minutes as the final whistle went finishing the game 2-1 Juventus which had no impact on the celebration of the evening. Congratulations went to Juventus but the standing ovation went to one man, Gary Neville. The 40,000 stayed on their feet as the Legend individually completed his lap of honour, thanking fans for their support throughout his career and fans thanking him for his loyal, passionate, and 110% service to the club.

Gary Neville will be missed by many United fans. His passion for the game and his club. The brilliant tackles he made and the few crunching tackles he made. Gary Neville shown passion in every game he played and his drive to succeed as a player, a Manchester United player, was awarded with a very successful and decorative career. Gary Neville has gone from being part of the United class of 92’ to finishing his career still at United in 2011. We will always remember the parts of Gary’s career where he shown passion for his club. His ’handshake’ with Viera, the number of times he kissed the badge, and not forgetting THAT celebration against Liverpool. Most of all we will always remember the superb player he was and the effort and work rate he gave to Manchester United. Gary Neville is a Legend to all United fans and Manchester United Football Club… Gary Neville IS and always will be A RED.

Thank you for everything Gary.