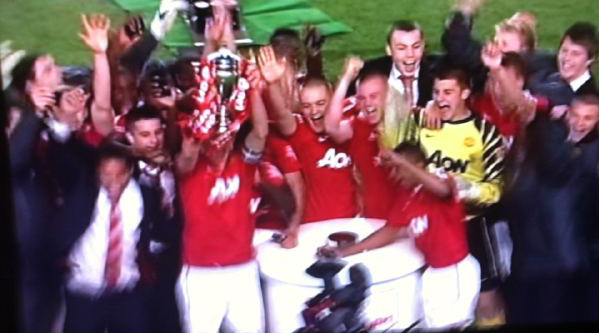 Manchester United welcomed Sheffield United to Old Trafford tonight for the FA Youth Cup final second leg. The youths made history by winning the cup for a record 10th time.

Both teams went into this game with two goals each after a 2-2 draw at Bramall Lane. In previous rounds of the competition Paul McGuinness’ youth side said goodbye to Liverpool and Chelsea playing in the top football grounds in England – certainly a great experience for the future of the club.

Before we start talking about the win tonight we won’t forget about an interesting fact from the visit to Bramall Lane; 27,977 fans traveled to the game, being the largest crowd in the last 18 months at Sheffield’s ground. However, the Blades took over 10,000 supporters to the game tonight.

The game started lively with an attack from Sheffield United but after that the majority of chances came our way. Despite creating more chances than the opposition, we didn’t play particularly well – unlike the impressive performance against Chelsea a few weeks ago at Stamford Bridge.

Too many players went for glory when they could have kept possession by getting the ball out wide where it is more effective – this means starting an attack from defence and gradually moving forward but that will come, the lads are still learning the game.

Manchester United opened the scoring thanks to Ravel Morrison, who reacted quickly after Will Keane’s failed attempt to kick the ball. However, a lot of credit must go to Ryan Tunnicliffe, who made a brilliant run and gave Tom Thorpe a through ball before sending a cross into a worried looking Sheffield United defence.

The second goal game just before half-time when a blade handled the ball in the box giving the red devil’s a penalty which Will Keane slotted home comfortable, scoring his seventh FA Youth Cup goal of the season.

Manchester United created the first real chance of the second-half just five minutes in, when Paul Pogba’s long range effort was saved by Sheffield goalkeeper, Long, who did very well to slap the ball out for a corner. However, as a result of United’s corner Ravel Morrison clashed heads with Harry Maguire – the young defender needed a stretcher to be brought off.

Some credit will go to Sheffield United though, they gave players like Paul Pogba and Will Keane little room on the pitch the boss the game, packing the midfield and defence with high numbers but that still didn’t prevent us from creating chances.

Those chances were awarded before the game reached the 70th minute mark as Ravel Morrison broke through the Sheffield defence striking a powerful shot into the bottom corner of the goal.

Joe Ironside pulled one back for Sheffield United in the 73rd minute, however, his manager replaced him with Liam Wilkinson around three minutes latter. He didn’t look a single bit happy about the decision.

Will Keane put Sheffield United’s hopes to bed with only 8 minutes remaining on the clock. Larnell Cole ran forward on the counter attack before Keane finished his one-on-one comfortably.

Once the referee blew for full-time the Manchester United faithful arose full of voice chanting “Champions”. Great experience for the youngsters giving them an even bigger taste of success. Congratulations to Paul McGuinness and staff!