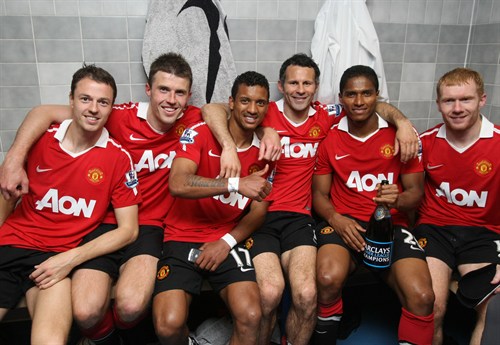 As United celebrated the success of achieving the club’s nineteenth league title at Ewood Park on Saturday plaudits from all angles came flying in for some of the Reds outstanding performers this season. Club Captain Nemanja Vidic and Ryan Giggs have been two of the most consistently brilliant players to pull on the Red shirt this season and as two of the dressing rooms older statesmen have provided the much needed know how and experience that has served United well. However this title win owes as much to a new emerging crop of youngsters who have played their part this year furthermore with United’s youth team securing a hard fought draw against Sheffield United in the FA Youth Cup Final first leg on Tuesday and have a great chance to clinch the trophy next Monday at Old Trafford the future is looking bright for United.

Without a doubt this squad is not given as much credit as it deserves, the best in England and at the pinnacle of European football with a crunch match against Catalan giants Barcelona to determine who is the continents best. I would love nothing more than if United could defy the odds and put the Spaniards in their place and although you may call this Red optimism I thoroughly believe we can beat them. Barca are a fantastic team but so are we, as Ryan Giggs so eloquently put it after the 1-1 draw with Blackburn at the weekend “We are Champions of England and in the final of the Champions League and people are still saying we are rubbish”. As I have said before United are a team in transition and this current squad could not challenge for honours for years to come however as they have proved time and again in the short term they are more than capable.

Many of you will remember the last time United had a transitional period after the Premier League win of 2003 United lost David Beckham to Real Madrid and embarked upon four years of rebuilding to finally regain the title in 2007. In that period United won an FA Cup, a Carling Cup and a solitary Community shield. After losing Cristiano Ronaldo to the same club we lost Beckham in 2009 many feared a similar baron(ish) spell for the Reds and coupled with the loss of Carlos Tevez there was admittedly room to worry. However since losing Ronaldo and Tevez in June 2009 United have won a Carling Cup, a Community Shield, the Premier League and have the chance to win the clubs fourth European Cup, winning the same amount of trophies as in the last ‘transitional phase’ and in half the time.

This is because United have had the perfect mix to carry them in the short term, the old heads of Giggs, Scholes, Van Der Sar have all been massively important but are coming to the end of their stellar careers, at the opposite end of the spectrum the likes of Chicharito, Anderson, the da Silva twins have all contributed hugely but all still have so much to give. Of course Van Der Sar looks set to retire at the end of the season which is a great shame however we have to respect his decision as it is the least we can give him after all he has given us, furthermore the resemblance that Edwin’s departure bears with the last time a huge goalkeeper left the club are uncanny as the current incumbent between the sticks has the chance to emulate Peter Schmeichel in winning the European Cup in his final game for the Reds.

His departure will be huge and one can only hope that an apt replacement will come in however the rest of the squad is looking much more secure. Even if Paul Scholes decides to follow Edwin and Gary Neville in hanging up his boots although his loss will be another blow given his experience and his undying ability I believe the Reds are set up to cope with such departures. The squad is moving in exactly the right direction, each year the younger players who have contributed so brilliantly this year improve and the more senior players in the squad like Fletcher, O’Shea and Ferdinand take on the mantle previously held by Van Der Sar and Neville et al. It is old news now that the Reds will add a number of new players to the squad in the summer, this has been misinterpreted as an acknowledgement from inside the club that this squad isn’t as good as it should be, not true it is merely an acknowledgement that Sir Alex is refusing as he has always done to let the squad age.; of course 37 year old Ryan Giggs will remain a United player next season however he well and truly breaks the mould and in playing like a 27 year old every time he plays who would bet against him continuing for a further season after that. Even if the effervescent Giggs does continue for a further two seasons the average age of the squad will be levelling out as an influx of young talent becomes the next generation of United stars.

Sir Alex has quashed rumours that he will finish his unconquerable spell as United boss at the end of the year opting to look to the future one in which Sir Alex will hope to build his next and most probably final great team. Ferguson now has what he wants to have before he leaves the Old Trafford hot seat; a team that can take compete at the highest level for the next ten to fifteen years. The likes of Hernandez, the da Silvas, Valencia, Nani, Rooney and Gibson have been schooled in the United way and alongside an influx of new talent and the experienced pros can become the next great United side.

I have highlighted there how bright the future is at Old Trafford, however that is what it is the future. For the present as well as celebrating the nineteenth title success we should acknowledge how great the team that won it has been, maybe not now but in years to come I believe this will be looked upon as one of the great United teams particularly if they manage to win the European Cup. Of course there have been times this season when the Reds have been below par but largely the Reds have been very impressive, in the last months of the season some of the performances particularly against Chelsea in the League and Europe were fantastic. OK the Reds have not been up to scratch away from home however if you compare it with the away form of the other teams in the league wins wise United have five which is only three behind the league’s best Arsenal, furthermore the Reds have only lost four times away from home which is the least in the League. The fact that nobody could really decide unanimously who should win United’s Player of the Year award shows how many individual stand out performers there have been. Valencia has returned from a massive injury and has been fantastic, robust, strong lethal when crossing a ball, Vidic, consistently brilliant all season long and last but not least the man who was ultimately crowned Sir Matt Busby Player of the Year award Javier Hernandez has been sensational, the Little Pea has adapted so seamlessly to the rigours of English Football it almost beggars belief. Sir Alex himself scoffed at claims that this side is below par saying that if United aren’t scoring ten a game then nobody is ever happy, people expect a lot because of how good United are and when they only grind out a 1-0 victory against someone like Bolton then people question the squad however often these games are the ones that set you apart as they stop you playing football. Just look at Arsenal and how much they struggle against teams like Blackburn and Stoke, United always turn up and produce the goods.