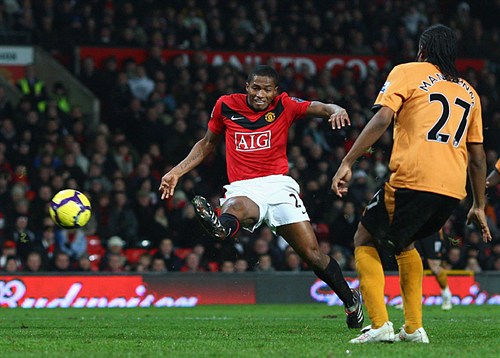 “Would I have Ronaldo back, in an instant, would he get in ahead of Valencia, no chance!” These were the types of tweets I was reading after Antonio Valencia’s stellar performance against Chelsea at the weekend, the Ecuadorian made one of the world’s best left backs look like a complete novice and in doing so only increased his popularity amongst the United faithful.

On a sodden night in Moscow in 2008 Manchester United lifted their third European Cup, at the heart of the celebrations was United’s number seven Cristiano Ronaldo. Albeit missing a penalty in the shoot-out in which United eventually prevailed Ronaldo had scored United’s only goal in the game and not only that but it was also his forty-second of the campaign, a truly incredible statistic which capped a season that will always be remembered as being all about ‘that boy Ronaldo’. As United’s legions of support celebrated all over the world into the early hours little did they know that in a years’ time Ronaldo would be leaving Old Trafford to head on to pastures knew. Naturally this would have caused worry, Ronaldo was the best player in the world by a long stretch, there was no way we could have replaced him like for like but many would have been confident that a big name would come in as Ronaldo headed for Spain. However if they would have been told his replacement would be a winger from Wigan Athletic there would have been panic stations!

Now in all fairness Antonio Valencia was never brought in to replace Ronaldo, in fact one suspects that Valencia would have arrived at Old Trafford even if the Portuguese winger had decided to stay; there was much talk about Valencia coming to Old Trafford long before Ronaldo left. Because of this the general feeling amongst fans was that a big name would be following Valencia into Old Trafford, Michael Owen did follow who surely counts as a big name however he is nothing at all like Ronaldo and was probably brought in replace Tevez more than the extravegent Ronaldo.

United have never replaced Ronaldo, looking back now it was nigh on impossible, at the time there was nobody who could touch him even Lionel Messi had yet to reach his stratospheric heights. What Ferguson did, as he has done so many times before is adapt, there is not one single manager who could reinvent his team as many times as he has done surviving the departures of Robson, Cantona, Keane and Ronaldo yet still managing to keep United at the pinnacle of domestic and European football. He knew that Valencia could never do Ronaldo’s like for like job but Ferguson knew of his ability as an out and out winger and saw how this would enable him to continue despite the loss of the 2008 World Player of the Year.

Since Antonio Valencia’s arrival he has adapted instantaneously and looked like an integral member of the squad from the very first time he played at Old Trafford. United are famed for their attacking no nonsense wingers, run at your man, beat him, send in a cross, this pretty much sums up Valencia’s style of player and has seen United revert back to playing as they once did with two natural wingers left and right. This has not only improved United’s supply line but has benefitted Wayne Rooney who was unleashed as a centre forward for the first time in his United career upon Valencia’s arrival. Wayne and Antonio forged a lethal partnership Rooney scoring thirty-four goals and Valencia setting up thirteen, whilst notching seven for himself.

If it wasn’t for Rooney’s huge goal return many felt that Valencia would have won United’s Sir Matt Busby Player of the Year Award, as it was it went to Wayne but much was expected from Valencia in his second season as United added a greater goal threat to their side through the purchase of Javier Hernandez and through the revitalised Dimitar Berbatov. However as we all remember disaster struck in the first home game of the Champions League when Valencia fractured his ankle and severely damaged ligaments in his leg, he was subsequently ruled out for six months.

So after a thoroughly under whelming arrival to Old Trafford as fans craved for a marquee signing the same fans were now wracked with worry as to the impact his absence would have on United’s season and of course the impact on the player himself, how times change. The fact that Valencia has not only returned from such a massive injury but also pretty much continued where he left off is remarkable, many players despite returning to full fitness cannot rekindle their form prior to their injury, Alan Smith is a case in point.

Since Valencia’s return against Arsenal in the FA Cup fifth round in March he has typified the cliché of it being ‘like signing a new player’, he has been utterly brilliant. His pace and aggression were still with him in abundance and he had not lost his ability to beat a man with ease. If there was one concern in his first few weeks back from injury it was that when getting in to good positions unlike last year when he would pick out a pinpoint cross Valencia was over or under hitting his attempted layoffs, however only the harshest of fans picked up on this and it was largely down to rustiness which surely can be understandable after such a lengthy spell on the sidelines.

In recent weeks his crosses have certainly been back with a vengeance, although he did not get on the assist chart in the crucial win over Chelsea at the weekend he tore Ashley Cole to shreds repeatedly out muscling him, out running him and generally out playing him. There was one occasion where Valencia got to the by line with only Hernandez to aim for and a crowed of Chelsea defenders in his way it seemed implausible that he would make anything of the situation, however with a quick shimmy he thundered in a perfect cross for Chicharito who really should have buried it, unfortunately the cross was so powerful it cannoned of the Little Peas head and flew over. However this event could have been added to a scrap book on Sunday evening as to the amount of times in which Valencia made room for himself and pinged in a pin point cross.  If there is one criticism of Valencia it is that he could do with using his left foot more often in fact one suspects that he probably uses his right foot for clutch, break and accelerator however with a right foot like his who can blame him!

Valencia’s return has been pivotal for the run in, his freshness has provided the manager with much needed options and his contribution has been terrific, one can only wonder as to what else United might have done this year with a fully fit Valencia as without a doubt his return has coincided with the best form we have displayed this year. He provides a terrific balance to the team more than Ronaldo ever could and I believe we are better off for that, of course Valencia has not been alone in impressing on the right wing this year though, Nani did a brilliant job in his absence notching ten goals and twenty assists. This only shows how impressive Valencia has been since his return, so good that that he has moved Nani to either the left wing or to the bench.

I have been coy in this article as to not too sound definitive, I didn’t want to make statements in the ilk of ‘what we have achieved’ because in all honesty we haven’t achieved anything yet. However we are only a draw and a win away from glory and yet another League and Champions League Double, how sweet that would be and what an answer to United’s legions of critics. United must maintain composure and if they do I would be shocked if United weren’t Champions by three o’clock on Saturday. Last season United effectively lost the League at Ewood Park on an utterly frustrating summer’s day in Blackburn; on that day Antonio Valencia had a glorious chance to put the Reds one up before half time, a goal that could have won us the title. So, how sweet would it be if Valencia made amends by scoring the winner to bring home the nineteenth league title?