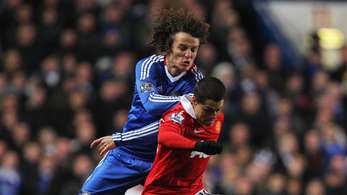 David Luiz trying to get the better of Javier Hernandez.

Chelsea arrived in Manchester Saturday evening ahead of their game against Manchester United at Old Trafford where a win for the blues may prevent Ferguson’s Red Army claiming their 19th league title. A nineteenth title would make United the most decorated football club in England officially knocking Liverpool of their fucking perch.

Myself and Anthony from TheShedEnder.com were interviewed by ChampionsLeague.ca before the quarter-final when Manchester United knocked Chelsea out of the competition – that’s where we began discussing matters about the teams we’re proud to support. So, before the big game tomorrow I decided to invite Anthony on to StrettyNews.com for an interview which we hope you enjoy.

Stretty: A lot of people during the week have discussed how Chelsea can beat Manchester United and it all comes down to Ancelotti’s tactics on the day. Will Chelsea go for the trusted 4-3-3 or will they try a 4-4-2 in such a big game?

The Shed Ender: I’d stick with a 4-3-3 in this one, especially as the likes of Didier Drogba and Florent Malouda have come back to the boil using this formation. It’s the system that has hauled us back into contention and tomorrow isn’t the right time to start experimenting again. We have a strong bench there if we need to make changes during the game, but it’s best to start with what we know.

Stretty: With a higher quality of refereeing in Europe Manchester United knocked Chelsea out of the Champions League this year. Without the help of Martin Atkinson tomorrow are you more worried than usual?

The Shed Ender: Not really. Webb’s appointment has come under a lot of scrutiny in the media as he has often been accused of being a United fan and there’s plenty of mocked-up photos of him in red out there, but would he want to live up to that reputation tomorrow by making a contentious call? Not so sure about that.

Stretty: Howard Webb supports Rotherham (not Manchester United), who finished 9th in League Two this season – 3 points off a promotion play off position.

Roman Abramovich signed Fernando Torres from Liverpool in January for a fee reported to be worth a massive £50million. Since arriving the lady boy only hit the net once, in a game that should have been postponed. Do you think it was a waste of money?

The Shed Ender: Only time will tell. Nicolas Anelka was signed in the January of 2008 and he only scored 2 goals. The following season he scored 25. Torres is a long-term signing and I think he needs a pre season and we’ll start to see his best again next season.

Stretty: Chelsea at the start of the season looked like they would run away with the title, winning games comfortably and working on what was an impressive goal difference. Do you think the sacking of Ray Wilkins was to blame for the whole slip up?

The Shed Ender: No, but I don’t think it helped matters either. It obviously did not do us any favours to suffer such a disruption in the middle of the season, but injuries to the likes of Lampard, Drogba, Alex and Terry highlighted our worrying lack of depth in the squad and there was no way the young players were going to be thrown in the deep end during the ‘bad moment’.

Stretty: Michael Carrick, who has been criticized a lot throughout the season, seems to enjoy playing against Chelsea and Frank Lampard. Do you think this will be the big battle tomorrow and if not, what will be?

The Shed Ender: Lampard was a little quiet during the recent Champions League games, but I think the bigger battles are elsewhere on the pitch. Chelsea will have to watch out for the Rooney and Hernandez (I refuse to call him by his ridiculous nickname) combo, and both Rio and Vidic will have their hands full with Drogba if he continues his good run of form.

Also, I think the return of Antonio Valencia has been a real boon for United, especially as he has found his feet quickly since returning from his injury. And for us, Malouda has rediscovered his goal-scoring touch of late and Kalou has chipped in with some important goals too.

The Shed Ender: For the fee, it would have to be Javier Hernandez!

Stretty: Finally, can we have your prediction on Chelsea’s starting XI and the score/result?

I’d have probably predicted a score draw for this one, but that would be no good to us and we have no choice but to go all out for a win. 2-1 Chelsea.

That’s the end of our interview with The Shed Ender, so we would like to thank him for taking the time to answer all our questions. If you would like to ask Anthony something about the game Sunday, feel free to leave a comment in the section below or you can chat to him via twitter @theshedender.