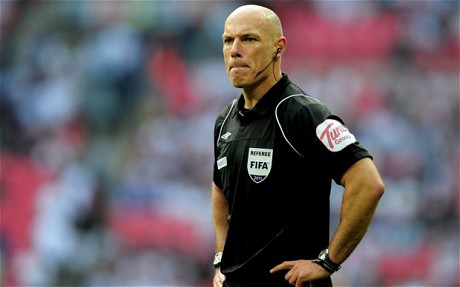 Howard Webb will referee today’s potential Premier League decider at Old Trafford between Manchester United and Chelsea. And as expected, many football supporters (ABU’s) up and down the country have been making sly comments about the Sheffielder being bias towards United, so I would like to end all speculation showing that Howard Webb is NOT a fan of Ferguson’s Red Army with a short video I found thanks to MirrorFootball.co.uk.

The footage shows Mr.Webb, aged 39, picking up a baton to conduct the Anfield Anthem “You’ll Never Walk Alone”. Watching this video worries me going into the big game today because he’s currently being put under pressure by many to make decisions against Manchester United preventing them coming Champions for a record nineteenth time – all because he has a history for giving the Reds a few decisions.

It’s remains unknown where the embarrassment took place but Mike Dean (another Premier League referee) was also caught celebrating in voice at the event. Is this enough proof to end the speculation of Howard Webb being a supporter of Manchester United? He also grew up a Rotherham fan – more information for you to take into arguments.