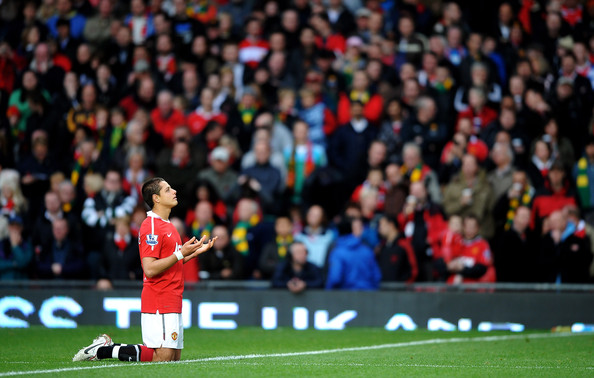 Manchester United moved to within a point of a record nineteenth title after a deserved win against second-place Chelsea at Old Trafford – officially knocking (the dippers) Liverpool of their fucking perch!

Since losing away to Arsenal last Sunday, I have suffered sleepless nights all week thinking about this fixture against Chelsea, who took the title from us last season thanks to dodgy refereeing (Drogba’s goal at Old Trafford which was a mile offside). The victory today puts us six points ahead of second-place Chelsea with only one point needed from the two games remaining against Blackburn and Blackpool.

Chelsea started the game with the “trusted 4-3-3” that couldn’t deal with Javier Hernandez, who broke the deadlock just 36 seconds into the biggest game of the season, the Premier League Title-Decider. Ryan Giggs picked Park Ji-Sung out with a fantastic pass that was controlled brilliantly before seeing a through-ball to Hernandez, who took advantage of David Luiz’ deflected touch by beating Petr Cech with ease for his 20th goal of the season.

This rattled Chelsea’s back-four and left Carlo Ancelotti frustrated with David Luiz. The Italian looked at his bench a number of times inside the first 10-minutes thinking about taking the Portuguese defender off for 28-year-old Alex and finally did so at half-time.

While Chelsea took their time to wake up Wayne Rooney scared Cech after a terrific long-range shot that just went wide. Wazza looked ready for the big occasion like the rest of the team – made enjoyable viewing for all Manchester United fans.

United continued to challenge Chelsea’s worried-looking defence scoring their second goal in the 23rd minute, when Ryan Giggs got away from Salomon Kalou after a short corner and crossed the ball into Nemanja Vidic, aged 28, who scored with his head 8 yards from goal.

Vidic’s goal came while Chelsea began to settle into the game, but they still managed to challenge Van Der Sar with chances coming from Didier Drogba and Kalou. Van Der Sar’s retirement raised even more eyebrows today including Ray Wilkins, who suggested Ferguson to force the Dutch goalkeeper to sign another contract.

Howard Webb was spoke about a lot during the week when it was announced that he would referee the title decider between Manchester United and Chelsea. His overall performance was average but he still made some important calls. Branislav Ivanovic should have been sent off in the first-half after a second clash (received a yellow after the first) with Wayne Rooney which left our number 10 down in agony. The Chelsea fans felt that Rooney was making most of the incident and shouted abusive and ignorant chants at him – what’s new?

David Luiz didn’t have the best half of his Chelsea days and paid the price for arguing with boss Ancelotti. The 23-year-old that moved to the London side in January from Benfica made way for Alex before the second-half started. The Chelsea manager also brought Ramires on for John Obi Mikel, who in my opinion was useless yet again – glad he didn’t come to us in 2006!

Lampard stopped Antonio Valencia’s cross in the 52nd minute using his arm inside the box but referee, Howard Webb, refused to award Ferguson’s Red Army a penalty despite the linesman being in a perfect position to spot the blatant handball.

I think it’s fair to say Chelsea never looked like they were going to score, so Ancelotti decided to bring Fernando Torres at the expense of Kalou. However, the lady boy made very little impact in the 25 minutes he played despite the blues scoring two minutes later thanks to Fat Franky Lampard, who converted an Ivanovic assist.

Wayne Rooney came close to scoring Manchester United’s third when Javier Hernandez made a run before squaring a ball to Wazza who’s shot was cleared of the line thanks to Alex. Impressive defensive play from the Brazilian we haven’t seen a lot of throughout the season due to injury.

I was caught at the edge of my seat in an uncomfortable position biting my nails (not very tasty) for the last 10-minutes but United’s back-four did a great job putting their bodies on the line a number of times. Jonny Evans and Chris Smalling were the two defenders Sir Alex brought off the bench today; the pair did an excellent job preventing Chelsea from scoring an equalizer.

Next week Manchester United travel to Ewood Park where they face a Blackburn side, who are currently one point safe from relegation. One point from that game will officially make us champions making us the most decorated football club in the Premier League!