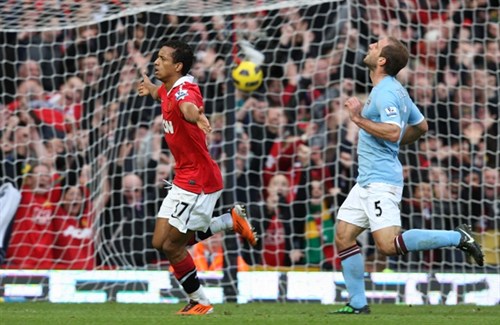 Not everybody’s cup of tea but even Nani’s most effusive critics would have to acknowledge that Nani has been a sensation this season and easily one of the most important contributors to the United team this year. Ok, he might have waned a little bit of late but with the return of Valencia and the sheer amount of games he has played this year it was surely expected? I for one believe that Nani’s contribution this year has gone woefully underappreciated and if the Reds are to end the season with another Premier League and Champions League double Luis Nani will have played a huge part.

Twenty assists and ten goals is, in its simplest form why Nani is worthy of recognition however since January 2010 Nani’s form has been so resurgent it almost beggars belief, whatever caused the ‘penny to drop’ as Mike Phelan stated after the 4-0 home win over Hull City at the half way point of the 2009/10 season is anybody’s guess but we should not be complaining we should be enjoying what a terrific player we have on our hands.

I understand that despite a wonderful season Nani still has some to win over, his tendency to feint numerous times before supplying a cross has subsided but has not been eradicated and furthermore  the fact that he has a penchant for shall we say exaggerating injury also grates with some fans. This is understandable and I hate seeing it myself however unlike some I am prepared to concentrate on his football and let that aspect do the talking.

﻿﻿﻿﻿﻿﻿﻿﻿The Mirror’s Oliver Holt wrote an article last month claiming that Nani should not have even been in the reckoning for player of the year because of his on field demeanour, maybe he has a point, and he also said that he would not vote for Didier Drogba for the same reason. I believe this to be a bit harsh however as in Nani’s case he might have an irritating side to him but the good thoroughly outweighs the bad.

The biggest appraisal of Nani this season is that United have not missed Antonio Valencia, although the Ecuadorian has returned in style in recent weeks his previous six month absence due to a broken leg was hardly noticed due to Nani’s sensational form. If United fans were told at the start of the season that United would miss Antonio Valencia for six months there would have been worry, without a doubt. Lasts season Valencia was the supply line, he and Rooney were the combination that it appeared would carry United to glory however it proved to be our Achilles heel, injury to Rooney saw a shift in tactics and the Reds struggled to deliver when it mattered most. This season United were without both of those said players for the pretty much the first half of the season, many would say that Rooney’s return to form only came in March which also coincided with Valencia’s return so taken that into account the Reds have had to cope with out arguably their best two players of last season for a large majority of this one. The fact that United are now in the Champions League Final and three points clear at the top of the Premier League with three games to go is largely down to the players who have stepped up in their absence such as Nani, Berbatov, and Hernandez who have all been crucial.

If we take those three players as a case in point they make a mockery of criticism levelled at United that they lack the flair and fantasy of previous teams, rubbish; this trio alone reek of flair. Berbatov is a magician; they say Messi has Velcro attaching the ball to his feet well he must have lent some to Berba as you only need see the Bulgarian stop the ball dead after falling fifty feet from the air to be impressed. Also Hernandez’s speed and enthusiasm is enough to get you out of your seat but above all Nani is the main magic maker in this current United side.

He can amaze, frustrate, baffle and thrill he is a trier and above all he always wants the ball. Arguably the most important aspect of being a Manchester United player is having the confidence to shout for the ball and run with it. Full credit must go to him, he’s a young lad in a foreign land and prior to 2010 had endured an inconsistent two years however he did not let that deter him he simply got on with it worked hard and showed that he is worthy of pulling on the Red shirt. The problem Nani had was that he was always in Ronaldo’s shadow, even after Ronaldo went his huge shadow still remained, Nani is a different player to Ronaldo though. It is a myth that Ronaldo was a winger, he played everywhere he may have popped up on the wing now and again but primarily he was moulded by Ferguson into a bullish centre forward. I would go as far to say that although Nani is not as good a player as Ronaldo he is a better winger, he loves to cut in and shoot like Ronaldo once did but he sticks to that wing and doesn’t wander like the Reds former number seven. I for one have found it refreshing to see United revert to the old fashioned system of having two natural wingers in the mould of Giggs, Sharpe, Kanchelskis and Coppell. Valencia and Nani in particular have the sole task and want to just attack the defender beat him get in a cross and hope United’s forwards will do the business which by and large they have Nani’s eighteen League assists this season is three clear of second place Didier Drogba and bearing in mind Nani has played less of late since Valencia’s return this is an impressive stat.

What makes Nani great though is his unpredictability you know that although a minute earlier he may have fluffed a decent opportunity the next he will bamboozle his opponent with some brilliant skill before pinging in a match winning cross. It’s exciting it’s typical United, I challenge any United fan to say they do not get excited when Nani picks up the ball, head down, tongue in cheek, you can see something is about to happened and as shown by the statistics it often does. Agsinst Schalke on Wednesday night was no exception, despite being deployed in the less favoured left wing position he still knuckled down and gave the Schalke 04 back four a torrid time chipping in with yet another assist to set up Anderson’s first of the night.

This season United have been accused of simply grinding out results and finding a way to win which, in some cases has been very true however this does not give the United squad enough credit given some of the performances of late in particular have been worthy of Champions and bearing in mind United have scored three or more goals on sixteen occasions this year will perhaps be enough to make those doubting Thomas’ think again.

When Chelsea won the League for the first time under the Abramovich Regime they won the vast amount of their games 1-0 however they were not accused of lacking fantasy but were praised for their rock solid team spirit and ability to do the job, for me this is just typical of the press and if United do go on to win a record breaking nineteenth title this year they will have matched Chelsea’s ‘doggedness’ but have provided a lot more flair, largely thanks to Nani.