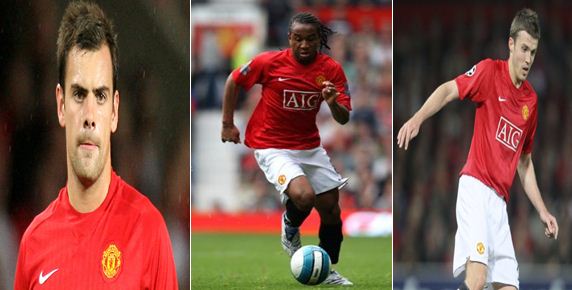 Without doubt the brunt of United’s fans criticism towards the squad this year has been aimed at the midfield, calls for a leader an enforcer or a greater creative influence have been rife on phone-ins, message boards and sites such as this over the past season. However I believe a lot of this criticism is unmerited and a look at the wider picture is certainly warranted.

United currently have five out and out central midfielders in Anderson, Carrick, Gibson, Scholes and Fletcher. Ok this quintuplet doesn’t exactly strike the same fear into opponents as the likes of Xavi and Iniesta but tell me a side that does? Possibly aside from Scholes criticism has been aimed at all the midfielders mentioned with comments akin to those already mentioned levelled at all four of them. It’s easy to get a googly eyed over the creative talents of other midfield talents plying their trade around Europe such as Fabregas, Schweinsteiger and Modric, all impressive players yes but what have they won to back this up? I’m not saying United would not benefit by having one of those aforementioned players in the team, not at all in fact I would be more than happy to have any of them operating in the Reds engine room. What I am saying though is that United’s midfield is definitely undervalued and underappreciated.

The loss of Owen Hargreaves has without disrupted things, many talk of how we lack his drive and ‘scruff of the neck’ persona however others would argue that when Hargreaves played he was often deployed on the right or at right back and not in the ‘Roy Keane role’. Regardless of your opinion his absence has forced a shuffle of the midfield pack. Michael Carrick for example has bore the brunt of the midfield’s criticism has been forced to change his position in the midfield to a much deeper lying role, piece of cake I hear you say but the change is more disruptive than you think. In Carrick’s first two seasons he was deployed in much more advanced role and his contribution to the Reds attacking play was much more prevalent, after the loss of Hargreaves Carrick has been expected to fill in for the cropped Canadian. Without a doubt Carrick’s form did dip after being annihilated by Barcelona in 2009 but recently he has shown his supreme passing ability and his terrific reading of the game, he has made the most interceptions in this season’s Champions League and is now currently starting in every game and is seen once again as crucial to the Reds exploits at home and abroad. Anderson has also received criticism however with time on his side many have given the young Brazilian time to prove his worth. Anderson has shown that he clearly has talent, in his first season he sensational against the big clubs playing brilliantly alongside Hargreaves, again showing the significance of Hargo’s absence. Since then however his development has been hampered by a flurry of big injuries and inconsistent starts in the first XI. Against Everton on Saturday he showed why Sir Alex bought United’s number eight back in 2007. He drove United forward time and time again and some of his long rang passing, often off target was pinpoint, we have this seen this before from Anderson thought. At White Hart Lane last season he was instrumental in the Reds’ 3-1 and thrived despite United being reduced to ten men however the odd brilliant game is not good enough at United, it needs to more regular. However with a bit of luck and some hard work put in at Carrington Anderson can definitely achieve this.

Achieving consistency is no easy task though and Anderson and Darron Gibson have both been affected by the limited oppurtunities that arise in the centre of United’s midfield. United fans must learn the lessons of the past though, for months the Old Trafford terraces berated Nani and Berbatov, useless, lazy, ineffective, and undecisive were words thrown at the two. Both were linked with moves away from United however after a remarkable reanaissance by the both of them Dimitar Berbatov is now United and the league’s top goal scorer with twenty-two goals and Nani has had a sensational season netting ten goals and creating eighteen. I for one am now quick not to judge players, I see it that the players on that pitch have clearly got something, Sir Alex has clearly seen something that can be developed it is then up to the player to realise that potential.

After the celebrations of Saturday’s crucial 1-0 win over Everton at Old Trafford my Dad text me declaring that he had been far from impressed with Gibson and on the face of it I did agree with him. However having taken a step back Gibson was deployed as low lying defensive mid content to tackle back, receive the ball from the goalkeeper  and defenders and distribute it to the more attacking players. Not the most appealing or interesting jobs to do on a football pitch but what he had to do he did it right, when Gibson was substituted for Ryan Giggs ironic cheers came from the fans sat beside me however I’m not sure that it was Gibson’s performance that had caused him to leave the field of play more that we had to introduce a more attacking influence to the fray.

The fact is that there may be more creative, skilful or even impressive midfields that United have but United currently site six points clear at the top of the Premier League with four games to play and are in the semi-finals of the European Cup, they also made it to the semi-final of the FA Cup so clearly they are doing something right. Now I am not saying that United don’t need any changes within the midfield in fact I would say we definitely do. Paul Scholes has been an unbelievable player in the history of Manchester United, I love to watch him play and his movement and reading of the game makes the mind boggle. Unfortunately though good things come to an end and whether or not Scholesy decides to end his illustrious career or carry on for another season is irrelevant. We need to prepare for life without him, Scholes at his prime brought the best out of players such as Fletcher and Carrick and the implementation of a quality young midfielder could invigorate them even further. I don’t for one moment concur with the argument that United need a clear out in the midfield department and hopefully may argument has made you think the same.

In Wayne Rooney I believe we already have a ready-made replacement for Paul Scholes, so perhaps Sir Alex won’t buy in the summer and hope for a similar improvement to that of Berbatov and Nani in the likes of Anderson and Gibson. However I doubt this, as a new signing might well bring those players on even more so, of course in the grand scheme of things my opinion matters zilch. You might fervently disagree with me and Ferguson may want to stick with his squad and prove that he was right all along, as he has done so often before. Whatever happens think twice before rejecting our current midfield crop.