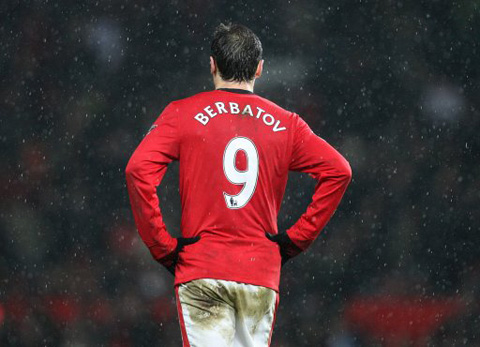 Dimitar Berbatov will miss Manchester United’s Champions League semi-final first leg clash against Schalke on Tuesday night. The Bulgarian missed Saturday’s win over Everton with a slight groin strain which he may have picked up in the FA Cup semi-final defeat against Manchester City, because our number nine (Berbatov) sat in the stands last Tuesday when United took only one point away from St. James’ Park.

Manchester United’s current top goal scorer (this season with a total of 22 goals) didn’t check in with the rest of his team-mates at Manchester Airport on Monday morning despite Ferguson claiming that he had no fitness concerns ahead of the semi-final after the 1-0 victory against Everton. But Steward Gardener, a commentator and presenter from MUTV, spoke to the boss earlier today and Ferguson told him Berbatov would be fit for Sunday’s match against Arsenal.

But if fit, would Berbatov have started against Schalke ahead of the in-form Javier ‘Chicharito’ Hernandez, who scored his 19 goal of the season at the weekend; twelve of those goals were scored in the Premier League and four in the Champions League. That’s very impressive for his first season at Old Trafford and Rooney has already labeled the Little Pea “buy of the century.”

Although one of the clubs most famous nights came against Bayern Munich in the 1999 final, The Reds haven’t beaten a German side in two-legs since the European Cup was transformed into the Champions league in 1992. However, us Manchester United fans are known for having belief so let that be the case for the two-legs home and away!

Send us your predictions for the game, below in the comment section or send us a tweet @StrettyNews.