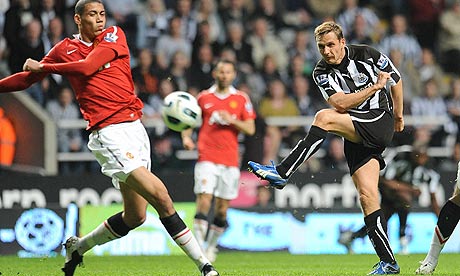 Manchester United had to settle for a draw against Newcastle at St.James’ Park Tuesday night to go seven points clear at the Barclays Premier League summit.

When Liverpool stunned Arsenal Sunday evening scoring an equalizer after the 100 minute mark everyone at Old Trafford thought that United were going to run away and win their historic 19th title. However, tonight’s performance didn’t show that because Ferguson’s Red Army lacked the desire we all expected after being knocked out of the FA Cup at the hands of bitter rivals, Manchester City.

Sir Alex Ferguson made five changes to his side that lost to City Saturday, bringing in Chris Smalling and Ryan Giggs replacing Rio Ferdinand and Paul Scholes, who is currently suspended after picking up a straight red. Dimitar Berbatov was forced to watch the game from the stands due to being unwell, so Javier Hernandez and Wayne Rooney started up front yet again.

However after United’s early chance, Newcastle began putting United’s back-four under severe pressure. Joey Barton did well on the right of midfield giving Patrice Evra a handful to work with. To sum it up, the Magpies gave what they got throughout the first-half, so this brought action to both ends and a scoreless draw never seemed to be on the cards.

Manchester United gradually eased into full gear with the movement of the two strikers, Wayne Rooney and Javier Hernandez – the pace of Nani didn’t help Newcastle either, causing their defence many problems. The Portuguese winger dropped ever deeper as the first-half wore on.

Just before the second-half ended the Reds went on another attack which involved Wayne Rooney, Ryan Giggs and Javier Hernandez. Unfortunately, The Little Pea’s effort was deflected straight off Newcastle’s full-back Jose Enrique, but the corner wasn’t given as the referee blew for half-time.

The United players came on to the pitch before their hosts in a determined fashion forcing new ideas into their heads before play resumed. This payed off as the Reds started the second-half better than the first, however, United failed to find that killer pass that would have gave them the goal to go nine points ahead of Arsenal putting one hand on our title.

Rooney and Nani both went close from distance throughout the second-half but Ryan Giggs, who wasn’t having the best half of his outstanding career, fired wide two minutes from time.

Drama occurred late on and no doubt it will be the talking point for many supporters as ex-Red, Danny Simpson caught Chicharito inside the box. Referee, Lee Probert made a huge decision giving the Mexican a yellow card for diving, which wasn’t the case as the replay showed contact. The Magpies, however will argue about their own appeal involving Lovenkrands, who was brought down by Anderson at the edge of the box.

Overall Manchester United’s performance didn’t deserve three points, despite having 20 percent greater possession of the ball than our opposition, Newcastle. We lacked bite and desire as I mentioned above and playing an in-form Everton side Saturday, the lads will have to be ready for a bigger fight in order to sit on top of the league comfortably.