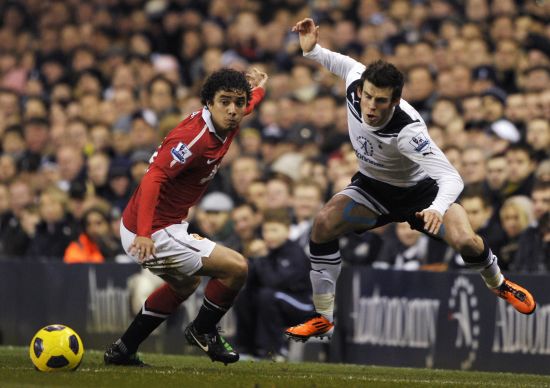 Rafael with Bale, PFA Player Of The Year in his back pocket!

Manchester United and Arsenal dominated the Premier League team of the year with at total of seven players between them being included in the XI. However, the whole ceremony became a joke when Tottenham Hotspur winger, Gareth Bale was named PFA Player of the Year with just seven goals and one Premier League assist. Nani, who wasn’t even a contender has had his most consistent season yet with nine goals and eighteen assists – that’s seventeen more assists than Bale…

Arsenal midfielder, Jack Wilshere claimed Young Player of the Year while Javier Hernandez, “The Mexicutionor” came third. The 19-year-old has been joked about since winning the award Sunday night but I have to admit he’s had a cracker of a season and I see him becoming a serious threat to any opposition in the future. Deserved in my opinion.

Mickey Mouse awards like these can go wherever they wish once United carry on competing for the main honors in football; the Premier League and Champions League because that’s what the best players talk about whenever they retire!