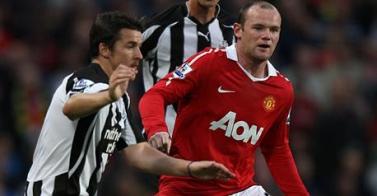 With the hopes of emulating the famous 1999 treble now gone, following the semi-final defeat at the hands of bitter rivals City, Manchester United next travel to St. James’ Park to face Newcastle United. Nothing but 3 points from this tie would suffice for the Red Devils in their quest of clinching the title for a record 19th time. With Arsenal dropping points against Liverpool in “Fergie time”, United now sit pretty at the top spot with 69 points, 6 points ahead of their closest rivals Arsenal.

Newcastle United
Injuries and suspensions have loomed large on the Toons and they will miss the services of Kevin Nolan, who is serving a 2 match ban after earning his 10th yellow of the season and Shola Ameobi, who suffered yet another injury. Newcastle are already without Leon Best, who is out for the rest of the season. Long term absentee Hatem Ben Arfa (who was on the receiving end of a typical De Jong challenge early in the season) has returned to training but his involvement is highly unlikely. Ryan Taylor returns after serving his two match suspension along with Tiote. Stephen Ireland fit for selection for the first time since joining the club in January. But with his girlfriend getting badly injured last week in a car crash, he probably will not take part in the match at all.

Manchester United
Wayne Rooney returns from his two match “What? Fucking What?” suspension and is a certain to be in the starting XI. Javier Hernandez is likely to partner him upfront. At the back, Rafael can make a comeback after spending time on the sidelines because of a hamstring injury. Johnny Evans is also available for selection, having served his 3 match ban for receiving a straight red. In the midfield, Darren Fletcher and Paul Scholes will miss the tie, due to flu and suspension respectively.

Newcastle United have had a season full of ups and downs. Newcastle traveled to Old Trafford for their first match as a newly promoted team where Manchester United outplayed them to secure an easy 3-0 victory. But a lot has changed for Newcastle since then. The Toons have looked a completely different side under their new manager Alan Pardew. Pardew, whose appointment as a manager received mixed response from the fans, has recorded famous results for the team, including a 3-1 win against Liverpool and a 4-4 draw against Arsenal. Manchester United on the other hand would like to overcome the disappointment of losing in the semi-final of the FA Cup by recording a resounding win over the Toons.

Newcastle United will be content with even a draw from this match while United cannot afford to lose points at such a crucial stage, especially with matches against Chelsea and Arsenal to come later in the season. Sir Alex has seen it all before and he is the best man to handle the available resources at the crunch time of the season. United might rest Carrick who has been playing consistently for a while now. Ryan Giggs has looked comfortable in his new role in the center of midfield. Anderson or Gibson might partner him though I personally would love to see the energetic Ando start with Giggs. United started with a 4-2-3-1 formation against City but are expected to start with two strikers for this match, with Rooney playing just behind Hernandez in a seemingly 4-4-1-1 formation. Rooney looks to be enjoying his role just behind the main striker. This position gives him a chance to come deeper into his own half and collect the ball, something that Rooney loves. At the back, Rio and Evra might be rested to make way for Smalling and Fabio. Rio looked uncomfortable throughout the match against Chelsea but managed to shrug off his injury troubles to be in the starting XI against City. But with a tight schedule ahead, Sir Alex would not want to risk his central defender. Evra looked tired in the latter stages of the match against City. Michael Owen can expect a heated reception from his old club’s faithful as he returns to St.James’ for the first time since joining United in 2009.

On the other hand, even in the absence of few key players, Newcastle can still present a competitive XI against United. In the absence of Nolan, the onus of creating chances from the midfield now lies on Barton and Tiote along with Gutierrez and maybe Taylor on the wings. Newcastle wingers are not exceptionally fast and will be easy to contain. The stable back four of ex-Red Simpson, Coloccini, Williamson and Enrique is sure to be in the starting XI. Coloccini has been impressive at the back for Newcastle this season. An excellent header of the ball, he manages to find space inside the opposition box to send in a header or two. Enrique has enjoyed a decent season too and can be a threat while going forward. Upfront, Lovenkrands is certain to start. But in the absence of Ameobi, finding his strike partner might be a herculean task for Pardew. The inexperienced Nile Ranger started the match against Aston Villa but didn’t look threatening at all. Another youngster, Shefki Kuqi might get a nod to start.

Although the players and the gaffer are not taking this game lightly, United can expect to easily take away 3 points at St. James’. I’m predicting another 3-0 victory for the Reds.

A few words from the managers

Sir Alex Ferguson
“Going to Newcastle is the most important game we have coming up because the league is still our first priority.”

“They have fantastic supporters and you know they will be on your backs because they probably need three extra points, although I don’t see them threatened with relegation.”

“We have had some defining results up there but I haven’t forgotten we got slaughtered once 5-0 at St James’ Park – and I think they are still selling the videos!”

Alan Pardew
“It is a fixture I genuinely believe Sir Alex will be very wary of. Maybe not so much because he fears us as a team, but because he fears the ground and the reaction it can inspire the team to.”

“They have only lost a handful of games all season, but we have looked at how they lost those games and we have come up with what we believe is a kind of theme. They have Rooney, Berbatov, Nani. Our defence – which I thought was very good at Villa – will need to be on song.”