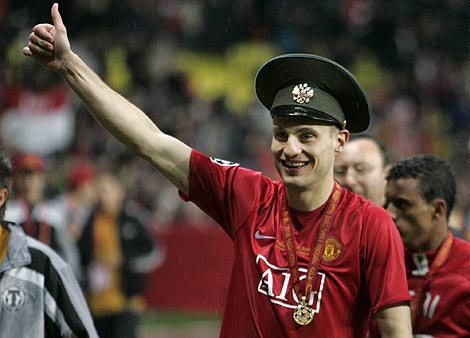 Vidic pictured after that magical night in Moscow.

Despite Nemanja Vidic being linked with a move to number of other top clubs throughout Europe, he has said that he would like to spend the remainder of his career at Manchester United.

Nemanja Vidic signed for Manchester United for a reported fee of around £7 million on 5 January 2006 after two+ years of interest from the Worlds Greatest Club. Since joining, “Vida” has become a fan favorite and labeled as one of the best defenders in the current world of football, due to being apart of one of the best defensive pairings (Vidic & Rio Ferdinand) of all-time!

The Manchester United captain was quoted saying: “I’m definitely here for the rest of my career now. It never came from my mouth that I would be leaving United. I love it here and I think I show that on the pitch.”

The Serbian defender also extended his contract with Manchester United in August keeping him at Old Trafford for another four years and he now insists that he never intended leaving the club, rubbishing all those reports linking him with a move to Spain & Italy.

This of course is fantastic news after the horrific weekend we all just witnessed due a disappointing result against one of our main rivals, Manchester City, in the semi-final of the FA Cup.

Below I have embedded my favorite chant (He’ll F**kin’ Murder Ya!) that is aimed at the heart of United’s defence, Nemanja Vidic also known as the Serbian Terminator.