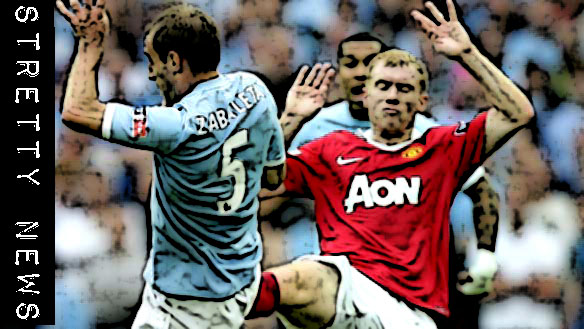 We lost to Manchester City. The bitters, the berties. Call them what you want but they outplayed us today and they go marching on to FA cup final in search of their first glimpse of silverware in 35 years.

The game started brightly for the men in red with two golden opportunities for Dimitar Berbatov which were not converted by the mis-firing Bulgarian after great play from Paul Scholes, Park and Nani. A dominant 20 minute period for the reds was abruptly ended after Gareth Barry swung at a loose ball but only managed to find the side netting with his shot. Following this shot City found a rhythm and began peppering the United goal with shots, the most threatening of those a Mario Balotelli effort which was forced over the bar by veteran goalkeeper, Edwin Van Der Sar.

City’s pressure didn’t stop after half time and they soon got their reward through a Yaya Toure goal. After a poor clearance from Van Der Sar made it’s way to the feet off Michael Carrick who left a stray pass that could only find Yaya Toure. The Ivorian midfielder gladly took advantage of the poor pass and scored, which would be, the deciding goal.

Perhaps the final nail in the coffin was the sending off of Paul Scholes in the 72′ minute. As the only Mancunian player in this derby tension was high for him, couple this with the “Ginger prince’s” poor tackling ability and you’ve got yourself a calamity waiting to happen. And it did. As Pablo Zabaleta and Scholes chased down a 50/50 ball, both with high feet the Argentinian came out the worse when Scholes connected with Zabaleta’s thigh with his studs and rightfully saw red.

United’s midfield was incredibly uninspiring during the late stages and failed to create much of note. The introduction of Anderson sparked some enthusiasm there but, not first time this season, his finishing product was lacking. City held of any signs of a comeback at arms length with Nigel De Jong and Gareth Barry sitting in front a strong centre back partnership including the immense Vincent Kompany.

The final whistle was met by jubilation from the Manchester City fans who seemingly have yet to realize they still haven’t won a trophy. Unfortunately on the field at this time was another story, the notorious Mario Balotelli once again in the spotlight for the wrong reasons. It is unknown what sparked this minor scuffle between Anderson, Rio Ferdinand and Mario but I’m sure it will be given apt media coverage in the coming days. However, nothing could be said or done to change the result and City deservedly went through to the FA cup final. Something which wasn’t so deserved, however, was the reaction from some United fans on social media websites like Facebook and twitter.

A defeat from such bitter (pardon the pun) rivals is never easy to take but the reaction of some United fans is nothing short of disgusting as Stretty expressed on the sites Facebook Group. Some said that they hate these scapegoats. Others called them cunts, more wished for their death. All this from United fans. And it wasn’t even the worst defeat ever.

As I said above losing to your rivals is bad, especially as they now have their best chance in 35 years to win something but it was inevitable. City had to win something soon and it’s not the end of the world if they do it now.

City have a long way to go if they are ever going to make United fans jealous and will forever be in the shade of Sir Alex’s men. The catastrophic day portrayed by some is perhaps an overreaction as Manchester United’s priorities lie elsewhere as we bid to end the Scousers reign as the most successful English club in English history by finally clenching the coveted nineteenth title. Also, an illustrious Champions league tie in Wembley with Spanish giants Barcelona or Real Madrid if we can beat semi-finalists, Schalke. You win some you lose some and Manchester United football club has definitely lost worse.