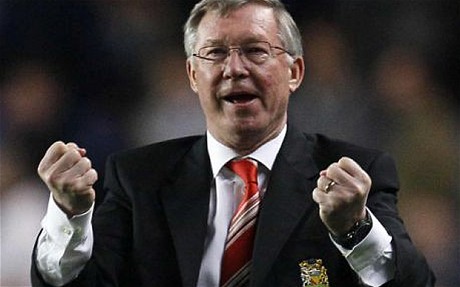 As United prepare to face our blue rivals at Wembley for the first time ever the semi-final that awaits promises to be one of the best Manchester derbies in years. As in all cup games results can hinge on a refereeing decision, a moment of madness, a moment of magic. However with the Reds now chasing an unprecedented second treble the man who could make the decisive difference won’t even be on the pitch at Wembley come Saturday evening.

Sir Alex will not be taking his usual place in the Wembley dugout, instead he’ll be stuck in the director’s box as he serves the fourth of his fifth game touchline ban however in recent weeks this has made little difference to the Reds fortunes and I don’t see this crunch clash being any different. Ferguson has been and done this all before and without doubt the burning desire to put City in their place which is shared throughout the entirety United’s faithful is echoed in our manager. Unfortunately City are now a force to be reckoned with and like it or not they are edging closer to a first trophy for thirty-five years although there does seem to be something missing down at Eastlands as one of the most expensive sides ever assembled in football has flattered to deceive at times this season, however some would argue the same could be said about United. People may dispute the quality of both sides but one thing United have got is desire, team spirit and a will to win and this has yet to be shown in Manchester City’s newly assembled outfit in my opinion and this all derives from Sir Alex Ferguson.

The last time United faced City in a semi-final of a major competition was only last year which in itself shows a sign of the times. That game was a typically fiery, entertaining and closely fought affair which is what many a neutral fan will be hoping for at Wembley on Saturday night. United did emerge winners as we all remember with Wayne Rooney notching a last minute winner at Old Trafford to send the Reds through to the Carling Cup final 4-3 on aggregate. Before that game Ferguson used the ludicrous statements from City CEO Gary Cook who proclaimed in a New York bar that City would very soon be the biggest team in the country. Although he denies it Sir Alex is the supreme psychologist and he knows just how to tap into the players psyche and how to get them hungry and willing to fight. After United’s Champions League quarter final win against Chelsea on Tuesday night Graeme Souness, reporting for Sky said that Sir Alex has a team who will run through brick walls for him, not exactly the most popular man in the eyes of United fans however Souness does raise a valid point. Debates have raged on all season about the quality of United’s side and I’ve heard many that have said that it is the worst squad we have had in years, I fervently disagree with this as you cannot reach such lofty heights in all competitions simply because your opponents are poor. You only need look at recent games to see the Reds are far from just “getting by” they have shown some fantastic football of late, particularly after the recent international break. One Liverpool fan even rang up BBC Radio 5 Live after the Chelsea game and proclaimed that although he hated to say it United played like European Champions against the men from Stamford Bridge. But still no matter what you think of the United squad or how the Reds are playing they still manage way to win which at this stage of the season is all that matters.

Now people in glass houses shouldn’t throw stones and although United sit top of the league and are in the semi-finals of both the FA Cup and the European Cup we could still very easily end up with nothing and I will be shot down in flames regarding all these remarks about team spirit and finding a way to win. With Ferguson in charge though I am feeling very optimistic about what might lie ahead for United this season, let’s be frank most Reds at the start the start of the season would have happily taken a record nineteenth title alone, most still would in all honesty.  However the fact that we are still in for three trophies in mid-April is testament to the hard work, commitment and desire of the 69 year old Scot. He seems as hungry as ever and at a time of the season where many go into their shell Ferguson thrives.

As Reds of course we want to see City’s wait for a trophy to go on forever, it’s natural as we football fans thrive on banter however realistically it cannot go on for much longer but this is not important. What remains vital is that United stay ahead of the game and at the pinnacle of English, European and World football and recent weeks have in my view given United fans plenty to be optimistic about however only time will tell.