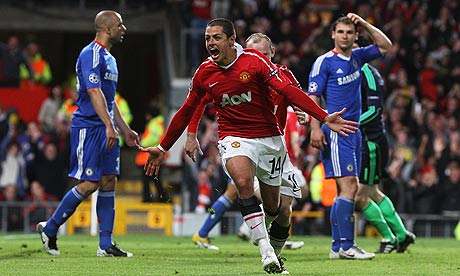 Hernandez celebrates his forth European goal. Image from the Guardian.

Manchester United have officially ruined Chelsea’s chances of picking up any silverware this season by knocking Carlo Ancelotti’s side out of the Champions League.

The three times Champions will be keeping an eye on tonight’s match between Schalke 04 and Inter Milan with the hope of drawing the easiest team possible for the semi-final of the Champions League after knocking Chelsea out of the competition Tuesday night. Rio Ferdinand looked like he picked up an injury early in the first-half but still did enough to get over the pain and put in an impressive 90 minute shift.

The first-half was full of intensity and action as Chelsea looked the better team for the first 30 minutes and Javier Hernandez having a goal disallowed for offside, which wasn’t… However, the Mexicutioner hit the net again scoring the opening goal of the match on the forty-third minute thanks to a low cross from Ryan Giggs which the Mexican converted easily past Chelsea goalkeeper, Petr Cech.

Wayne Rooney put in another terrific performance looking more like the excellent player that wore the same shirt last season. The England international went wide, deep, in and out of the box, giving extra protection to the Manchester United midfield that contained a much improved Michael Carrick, who seems to perform whenever we face the Rent Boys.

As I have already said, Chelsea were the better team for the first 45 minutes keeping greater possession, but United threatened nearly every time on the counter attack due to Hernandez, who is known for playing off the shoulder of the last defender. Rooney and Chicharito’s brilliant pairing showed more excellence as their work-rate payed off as well as Ji-sung Park’s, who did his usual shift – working those socks off.

Chelsea walked in at half-time two goals down on aggregate and knowing that if Manchester United scored once more, they would need more than one goal to stand a chance. The fifteen minutes break provided some humor when the Busby Babes took out a banner declaring John Terry “Mr Penalty”.

Ramires committed three unsuccessful tackles before receiving a second yellow card after tackling Nani from behind. Although, I would have preferred to have seen John Terry (already on a yellow) sent off after fouling Rooney, being last man back.

However, Didier Drogba gave the Chelsea fans something to be happy about when the Ivorian Footballer found the back of the net in the 77th minute, blasting a powerful shot past Edwin van der Sar, who pulled off a number of saves to keep the Reds on top.

The scoreline didn’t stay level for one minute as Ji-sung Park responded brilliantly from another Ryan Giggs assist and put Manchester United into the semi-final of the Champions League. His performance deserved nothing less than a goal – always proves his importance in Europe.