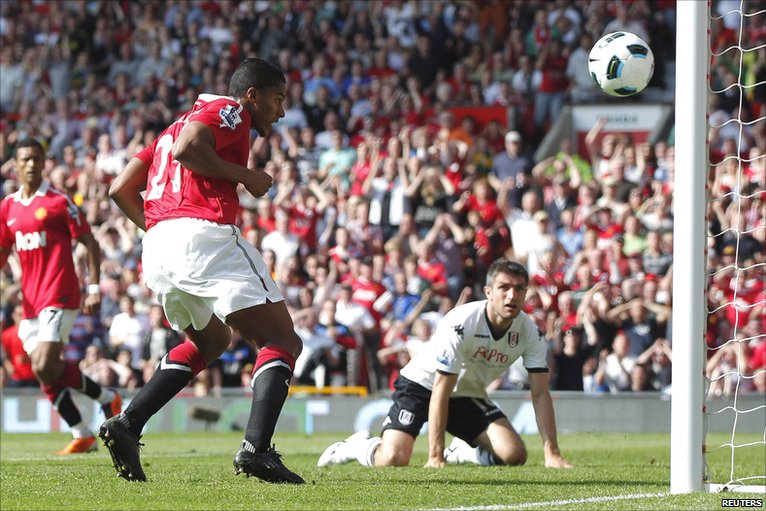 Despite Sir Alex Ferguson describing United’s second half performances as “lackadaisical” there were many positives to take from United’s first half showing and let’s face it, at this stage of the season it’s not how you win it’s that you win.

Making eight changes to the team that beat Chelsea on Tuesday United still managed to find zip and drive within the team and showed no signs that the changes were having any effect on the team. However it was Fulham who started the brighter, Gael Kakuta on loan from Chelsea, tested Kuszczak early on however the Pole was up to the task. Bobby Zamora then had a good opportunity to put the Londoners in front however he blazed his chance over.

This was the let off the Reds needed as after that United took control. Gibson and Scholes controlling the midfield but in particular it was Anderson shone in the engine room showing plenty of his Brazilian flair on a sun kissed day in Manchester. If Anderson could bring up a decent goal return and become more consistent in his good performances surely he would be one of countries best, as it is though Anderson has shown glimpses of the quality he possess but needs to really kick on in order to become a regular starter.

After a succession of United corners that came to nothing the Reds went ahead through a marvellous goal which was terrifically crafted. Nani beat three men before exchanging passes with Anderson, the tricky Portuguese winger then slotted the ball through a crowd of defenders and Berbatov received the ball and made no mistake slotting past Schwarzer scoring his twenty second goal of the season. The goal carried a hint of offside however it was extremely tight and surely advantage must go to the striker, in truth there weren’t many complaints from the Fulham defence.

Berbatovs goal seemed to ignite the enigmatic Bulgarian who, shortly after scoring received the ball on the right flank, he then proceeded to skin Brede Hangelaand and advance towards the area. Getting his head up United’s number nine teed up Anderson on the edge of the area who dragged is shot miserably wide. The Brazilian’s disappointment was evident and after scoring twice for the reserves in midweek would have expected to at least hit the target, however his all round play made up for his lax finishing. Everything went through Ando and he really looked like he was enjoying himself pinging passes around like nobody’s business and his energy was infectious and spread throughout the team.

However it was Patrice Evra who provided the spark for the second goal playing a piercing ball in behind the Fulham defenders to Nani on the flank, the winger then raced down the wing and then bizarrely Mark Schwarzer then needlessly raced out of his goal for a ball he was never going to make. Make it he did not, Nani nipped the ball passed the on rushing Australian brought the ball under control and attempted a shot on goal which was headed off the line by Aaron Hughes. However his header went directly to the head of Antonio Valencia who had the simple task of making it two-nil. Nani’s fantastic form makes a mockery of how he was left out of the nominees for Player of the Year, at times he reminded you of Ronaldo in his pomp however he is more of an out and out winger than Ronaldo which fits with United current style of two attacking wingers whose sole intention is to whip balls constantly into the box. However Nani might be less selfish than Ronaldo but his contribution cannot be questioned, nine goals and eighteen assists is without doubt Player of the Year form and Nani played like he knew it.

United were coasting and having spurned one or two more decent opportunities including a Chris Smalling header that was deflected over the bar the Reds went in at half time sitting pretty.

The second half took on an extremely pedestrian feel and at times seemed like a training ground match. There were still chances for both teams however, Berbatov again played in Anderson who made a much better fist of his shot this time round but Fulham goalkeeper Mark Schwarzer was up to the task and palmed it away. At the other end former Chelsea man Eidur Gudjohnson struck a fierce strike from just outside the area which was brilliantly tipped wide by Tomasz Kuszczak. The shot then rippled the side netting and the Fulham fans to the left of the goal went wild believing the ball to have gone in, needless to say ridicule ensued from the home support.

The game then petered out with United saving vital energy ahead of their crucial Champions League tie with Chelsea on Tuesday and Fulham seemingly resigned to the fact that they were beaten.

A job well done and extremely good if not sweltering day at the office for the table topping Reds. Sir Alex’s horse may have stumbled at Aintree but United remain well on course for success.