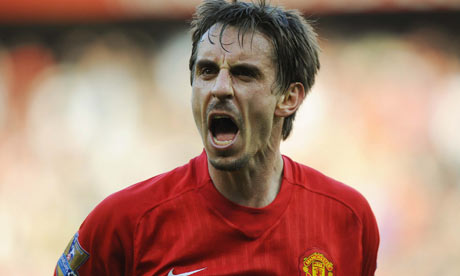 Gary Neville will play his last game at Old Trafford next month after announcing his testimonial against Italian giants Juventus.

The veteran full-back spent 18-years playing for Manchester United under Sir Alex Ferguson and has been linked with a few jobs since retiring, but today he also announced that he will be joining Sky Sports from next season.

The Bury born Mancunian wasn’t a World Class footballer, he just worked extremely hard and mastered the ‘simple things’, like Dion Dublin said on the RedCast. Gary Neville is loved throughout the Manchester United community, loathed by everybody else.

The 36-year-old made 602 appearances for Manchester United and won a numerous amount of honors including eight Premier League titles – that’s eight more than Steven Gerrard. He was also a member of the team that won the treble in 99. RedNev has, like he did to José Antonio Reyes’ leg, left his mark on modern football. Neville and Becks after that magical night in Barcelona.

“I am delighted to be given this game by the club,” G.Neville said. “It is going to be a very emotional night for me, especially as I pull on that red shirt once more in what will be my last game for the club.

“I intend to savour every moment and I hope the fans can share in my special night.”

Our friends over at Stretford End Flags have designed a large mosaic which Gary Neville has approved and it will be placed along the the North Stand for his testimonial. They are looking for 14 volunteers to help lay out the Gary Neville mosaic on the day of the game, so if you are interested, contact Andrew on twitter.

One response to “Gary Neville granted testimonial against Juventus”