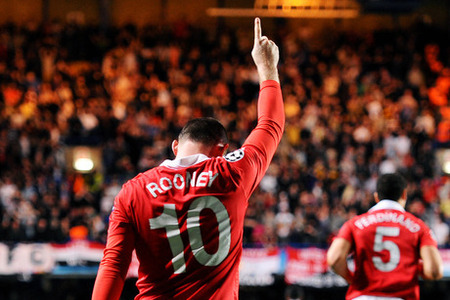 Wayne Rooney on the camera for all the right reasons.

A repeat of the 2008 final went Manchester United’s way as they go back to Old Trafford a goal ahead thanks to Wayne Rooney, who put United a step closer to the ‘swear way of heaven’ (Wembley).

Manchester United will obviously go into their second leg against Chelsea as favorites to reach the semi-finals after scoring an important away goal at Stamford Bridge. Ferguson’s injury list has also decreased since knocking French Champions Olympique de Marseille out of the competition; including Rio Ferdinand, Antonio Valencia and Park Ji-Sung who have already made a positive difference.

The only goal arrived in the 24th minute, converted by Wayne Rooney straight in off the post. Michael Carrick, who in my opinion had his best game of the season, delivered a pinpoint ball over Jose Bosingwa’s head onto Ryan Giggs’ foot. The Welshman’s first touch took him a yard or two away from Bosingwa as he cut inside before having a look up and spotting ‘Wazza’ alone, 10 yards from the goal.

Fernando Torres, said to be Nemanja Vidic’s worst nightmare was yet again ineffective, causing Ferdinand and Vidic no trouble whatsoever. He also picked up an embarrassing yellow card in the final minutes after making a few pathetic dives. The partnership between the defensive pair was a pleasure to spectate, however, no disrespect to Chris Smalling who did a marvelous job in United’s back four, while Rio was out injured – certainly performed much better than expected!

Before the half-time whistle, Chelsea were unlucky not to grab an equalizer after ‘Fatty Lampard’ scuffed his attempt, that was cleared off the line by Partice Evra, who seemed like he brought the wrong boots to Stamford Bridge, slipping a number of times reminding me of ‘Bambi on Ice’.

Minutes after the second-half began, Rafael da Silva picked up a knee injury after a nasty collision with Ivorian striker, Didier Drogba. I wouldn’t call the young Brazilian injury prone, he just has a major fearless problem – like a lot of South American footballers!

Fernando Torres, the “scouse b*stard” headed a Jose Bosingwa cross testing United’s unbeatable goalkeeper, Van Der Sar, who pulled of an astonishing save to preventing him from scoring his first club as a Rent Boy.

I remember my head lowering towards my hands in disgust when Ramires tumbled after a late challenge from Patrice Evra, who probably just slipped… But if you visit our pal, Scott’s blog about the incident, you’ll see that it should have been a free kick, not a penalty! It’s also about time we get a few decisions our way at Stamford Bridge, the stadium that was full of voice last night, no thanks to the Chelsea fans!

I couldn’t be happier with the result, we’re in a great position to qualify for the semi’s and all pressure is on Chelsea because they can’t afford anything less than a win at Old Trafford.