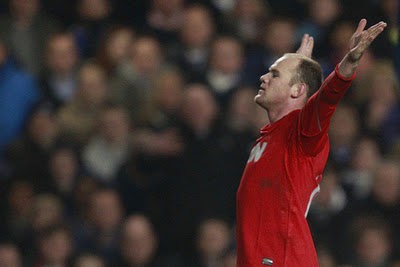 Manchester United will take on Chelsea in the Champions League quarter-final fist leg Wednesday night at Stamford Bridge. You can catch the game live from our partners, WatchMUFC.com.

The tie has all the makings of a classic, two great sides who know how to play football and are hungry for Champions League success. The last and only time that these teams met in the Champions League was in Moscow for the showpiece final back in 2008, I don’t need to remind you about events on that night, however I will anyway!

Having dominated the first half United lead 1-0 thanks to a Ronaldo header however United’s play merited much more. However just before the half time whistle again this run of play Chelsea scored a fortunate leveller, they went on to dominate the second half but neither side could find a winner. Extra time was played on an even keel and the game was decided on penalties, after Cristiano Ronaldo missed his spot kick John Terry, Captain, Mr. Chelsea (he could not have been bigged up more by commentator Clive Tyldesley) had the chance to win the Champions League for Chelsea. However on his run up he slipped and his penalty kick hit the post, afterwards Anderson and Giggs both scored their spot kicks before Van Der Sar saved Nicolas Anelka’s penalty to win United their third Champions League.

This is not the first or the last time Moscow will be mentioned in the build up to this game and it is likely that it will be Chelsea’s players who are dwelling on Moscow rather than United however the Reds have their own things to worry about and their own reasons to want revenge. United have a shocking recent record at Stamford Bridge, results wise anyway. The last time United won at the Bridge was back in April 2002 when they ran out 3-0 winners with Scholes, Van Nistelrooy and Solskjaer netting the goals, however since then either poor performances or desperately bad luck has gone against the current Premier League leaders. Fortunately though in recent games at the Bridge United have played very well and have played  equally as well if not better than Chelsea. In the most recent clash only last month United were beaten 2-1 and all associated with United were left gutted not so much at the dropping of three points but in the manner of the defeate. United dominated the first half and went in at half time deservedly 1-0 up, the Reds continued where they had left off after the break before Chelsea equallised from nothing. David Luiz should have been sent off after a serious of wreckless fouls (I do rate Luiz but there is no debate he should have seen red) before Chelsea won it with a questionable Frank Lampard penalty.

So despite all the talk in this game being about Chelsea gaining revenge for defeat in Moscow revenge should very much be on the agenda in Uniteds camp aswell. Manager Sir Alex Ferguson certainly wants to win telling the media at his pre-match press conference:

“The name of the game is to go back to Old Trafford with a goal in our pocket. Or hopefully even two goals.”

A confident statement from a manager whose side has not beaten the opposition at their ground for eleven years, in truth though United have nothing to fear. Chelsea have had a poor season, after looking like they might run away with the Premier League in October they capitulated over the wineter period and although they have shown signs of returning to form the draw at Stoke on Saturday (which they should have lost) has re-opened the problems that still remain at Stamford Bridge.

However a Champions League semi-final against Manchester United will certainly interest Chelsea’s players more than a Saturday afternoon tussle with Stoke and it will not be easy for United. Positively though United are beginning to welcome back a number of key defenders after lengthy lay offs, Ferdinand and Rafael could be invloved also Jonny Evans is availible. Wes Brown and John O’Shea also trained with the squad today ahead of the Chelsea game.

I thoroughly expect Ferdinand to be thrown in at the deep end as the sooner Rio Ferdinand and Nemanja Vidic resume their defensive partnership the better for United. I rate Vidic as the most complete defender in the world, his dominance in the air is superb as is his tackling ability and his command over the back four, a thoroughly worthy Manchester United Captain and in my opinion a worthy player of the year. However Ferdinand is the silk to his steel the understanding between those two settles Vidic down as occasionally without Rio Vidic will make some rash decisions he wouldn’t normally make, like at Upton Park on Saturday.

For me if United have the Ferdinand Vidic axis for both legs they have an extremely good chance of going through.

As for the attack and it has to be potent given Fergie’s call for goals but I do expect Sir Alex to continue with his 4-5-1/4-3-3 European policy. Rooney should start at the head of the attack, I would imagine the likes of Nani and Valencia will provide support from the flanks and Park may be given a similar free role that he operated at Upton Park, this would utilise the Korean’s energy in both an attacking and defensive perspective. The energetic Park made his first appearance for United since boxing day on Saturday and it was the first time he’d played a game since January however he looked fresh, fit and effective. His return could be as pivitol as Ferdinands as we all know the impact Ji has had in the big games over previous season.

A win at Stamford Bridge would do wonders for the United squad, not just in the context of this tie but for the season. Getting the proverbial monkey of their back would help a great deal in my opinion and could be a big boost for United as they battle for silverware on all fronts. Fortunately though if our poor run of results continue United have the luxury that if they score once but get beat 2-1 like back in February this will still be very much a winnable tie as United will be able to win 1-0  at Old Trafford and progress.

The Old Trafford tie is the important one, however it’s only important if United bring back a healthy score back to Manchester.

Maybe, like it has been suggested by Captain Nemanja Vidic United might be more liklier victors if they  put in a poor performance as playing well has given us little favours in the past. Of course the skipper is speaking tongue in cheek but his comments do bear some sense of truth.

Goals are important tomorrow as is the result – the performance as Nemanja suggested, comes second.