Wayne Rooney couldn’t hold in his emotions after scoring a hat-trick for Manchester United, in Saturday’s afternoon kick off against West Ham United. The England international swore in a horrible, aggressive manner at the camera. ‘Fuckin’ What? What?! Fuckin’ Hell!’

As you’d expect, journalists from up and down the country were full of voice after watching this shocking clip, but Rooney had the decency to apologize after the 2-4 victory at Upton Park. I recall Steven Gerrard sticking two fingers up at Andre Marriner making a ‘V’ gesture following the referee’s decision to give the rat a yellow card – as a result, there was no punishment and Gerrard never apologized. 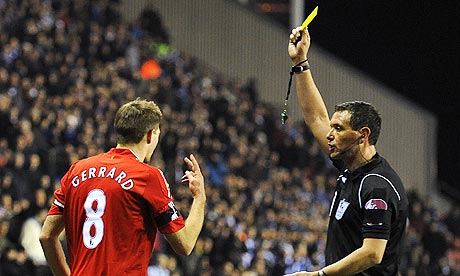 Rooney said: “I want to apologize for any offense that may have been caused by my goal celebration, especially to any parents or children that were watching. Emotions were running high and on reflection my heat of the moment reaction was inappropriate, it was not aimed at anyone in particular.”

3 responses to “[VIDEO] Rooney and his inappropriate celebration”