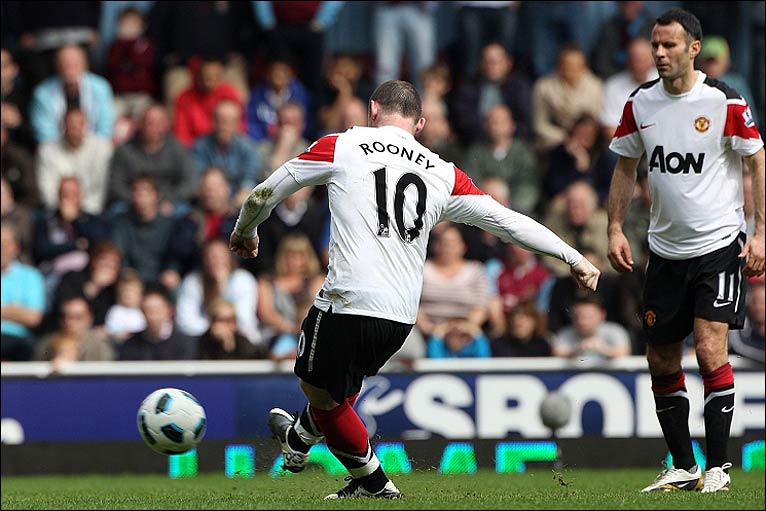 Manchester United notched another fantastic comeback in East London on Saturday afternoon as they went clear at the top of Premier League. By far United’s best away performance of the season but this result sets the Red’s up nicely as they head into the first leg of the first leg of the Champions league quarter final against Chelsea on Wednesday.

Despite a number of defensive injuries United’s starting line-up was a strong one with Sir Alex opting to go with a 4-51/4-33 formation with Rooney at the figure head supported by Park and Valencia on the flanks. Ryan Giggs was deployed just behind Rooney with Gibson and Carrick dropping deep and the back four consisted of Fabio, Vidic, Smalling and Evra. Tomasz Kuszcak made his first start in goal since Liverpool in the FA Cup third round as United rested Van Der Sar ahead of the European midweek clash.

United started brightly from the off with Ji-Sung Park, returning to the United side after three months out looking particularly lively and seeing plenty of the ball. United’s quick passing and moving won a flurry of corners in which Chris Smalling was unlucky not to socre as Rob Green palmed over. The league leaders continued their relentless waves of attack but just after the ten minute mark they were caught with a sucker punch.

After West Ham made a mess of clearing the ball Valencia attempted to cross for Rooney but Hitzlsperger hoofed clear and the ball bounced beyond Patrice Evra and Nemanja Vidic with Carlton Cole lurking. The English man pounced and went through on goal, although it looked as though Evra had control of the situation. Not so, Cole struck an early shot which cannoned into Evra’s raised hand, referee Lee Mason awarded a penalty without hesitation which Mark Noble duly dispatched with aplomb 1-0 West Ham.

The Hammers goal didn’t really change the pattern of play in truth as United continued to see plenty of the ball. For all our possesion though the Reds lacked the final ball, this was not helped by the solid partnership of West Ham’s central defenders Upson and Da Costa and just as it looked like United might draw level the Hammers struck again. Carlton Cole received a diagonal ball on the right flank and brought the ball down well, he then ran at Vidic and the big Serb took the bait and clumsily brought down Cole. Although on the replay the foul did appear to take place outside the box it was a close call and Mason a awarded a second West Ham penalty.

Another Hammers spot kick, another Mark Noble goal. This time Kuszcak dived the right way but the power of Nobles penalty beat our Pole in goal. Time and time again United make it hard for themselves and this game was no exception but credit must go to the Reds they didn’t let their heads drop and were almost immediately back in it. Antonio Valencia who had West Ham “on toast” according to Sir Alex spread the ball to Rooney on the right, United’s number ten then fizzed in a cross which was headed clear right on to the toe of Park who slammed a vicious drive towards West Ham’s goalkeeper Rob Green. Green produced a good reaction save however the shot was right at him and Park should have done better.

United who lost 4-0 last time out at Upton Park were determined not to let that happen again however things could have got worse on the stroke of half time. As the ball dropped out of the sky Vidic attempted to head the ball back to Kuszcak, his header wasn’t powerful enough and as Demba Ba tried to race on to the ball United’s captain hauled the man down, he was the last man. The the home crowds displeasure Lee Mason only awarded a yellow card. On a second viewing though this was not a clear goalscoring oppurtunity as Kuszcak would have beaten Ba to the ball, some referee’s may well have sent the Serbian off. Shortly after Mason blew the half time whistle and as United trudged in all concerned knew that changes were needed.

Changes there were, Sir Alex was a ruthless as usual taking off Evra and bringing on our current super-sub Javier Hernandez. The change saw Ryan Giggs drop to an unconventional role of left back. The change almost saw instant dividends with Giggs, bombing forward from left back and swinging in a cross in which Hernandez prodded over. The dissapointment was evident on the young Mexican’s face although as the song goes he only scores “when he wants”, and there would be more chances coming his way.

However shorly after United could have suffered a further set back as Vidic brought down Ba on the half way line,  luckily Mason opted to award only a free kick and not the second yellow which would have seen Nemanja dismissed. Vidic was now walking a tightrope and although United continued to press and threaten more with the introduction of Chicharito the score was still 2-0. As the clock ticked passed sixty minutes things began to change, United smelt blood and on the sixty-fourth minute Michael Carrick was brought down on the edge of the box. Step up Rooney who curled a spectacular free kick into Rob Green’s top corner to haul United right back in the game, game on!

The goal was all the more special as it was Rooney’s first free kick for United since scoring one against Fenerbache on his Manchester United debut back in 2004 and the free kick was not going to be the only similarity to that famed night. With the bit between their teeth United continued to press, the introduction of Dimitar Berbatov for Ji-Sung Park just before Rooney scored the free kick was another inspired change. The Bulgarian’s hold up play was fantastic  and he made the game look so easy it was almost laughable, he almost scored aswell from a near post poke after some sublime skill down the left hand side. However it was to be another striker who drew the game level. After patient build up from United including Carrick, Gibson and Berbatov the ball found it’s way to the brilliant Valencia on the right who whipped in a low left foot cross towards Rooney. The Englishman’s first touch was sublime as it took him away from the defender before he unleased terrific drive into to the bottom corner of the goal, United’s away support went wild surely now the Reds would take the three points they deserved.

Six minutes later United were in front, Valencia scooped a lofted ball to the advancing Fabio who’s mix of Brazillian magic and Manchester graft enabled him to get the byline. After turning Upson the young Brazillian attempted to cross the ball only for it to hit Upson’s lower arm and the third penalty of the day was awarded. Wayne Rooney stepped up against his England colleague Ron Green who he had been practising penalties against during the week, however it was Rooney who won the battle of whits sending Green the wrong way an planting a cool penalty into the bottom corner. More wild celebrations ensued on and off the pitch as United had seemingly pulled the impossible out of the bag once again. Not many sides can boast the quality United have in their ranks and even fewer the fight.

The Reds now looked to kill off the game to avoid a nervy last few minutes, Berbatov beat Da Costa to the ball and raced through on goal however the Bulgarian was beaten for pace but managed to maintain possession. He then proceeded to keep the ball for about thrity seconds displaying the most fantastic hold up ability. He waited and waited until the on rushing Gibson arrived, Berbatov teed him up nicely only for the Irishman to blaze over. No matter, with six minutes to play the effervescent Ryan Giggs made his umpteenth run up the left flank and after being played in by Berbatov hit an arrowed drive across the box which evaded two West Ham defenders leaving the simple task of tapping home to Hernandez. His seventeenth goal of the campaign was celebrated with a smile the length of Deansgate and mirrored every United fans emotions.

Afterwards United took the sting out of the game and brought on Nani for Wayne Rooney who had earnt his early rest. Another fantastic comeback but more importantly the performance was on another level to that seen on the road so far this season and it certainly bodes well as squeaky bum time begins to get into full swing.

My Man of the Match: Wayne Rooney

Hat trick hero but was much more than that as United talisman is looking more and more like his old self every game. Dictating play and running at defenders with confidence, It’s a huge boost to United to have a fully fit an firing Wayne Rooney back for the run in!