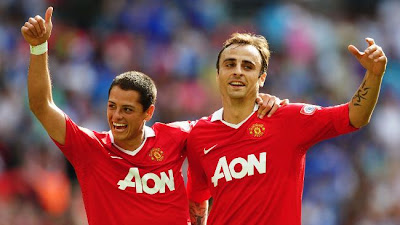 With transfer speculation rife amidst Sir Alex Ferguson “confirming” he will be bringing in two to three new players in the coming summer transfer market, and Wayne Rooney and Javier Hernandez hitting former alongside each other, many Manchester United fans have been busy on message boards like Facebook and twitter calling for the sale of Dimitar Berbatov, the league’s top scorer.

It’s not the first time United fans have been calling for the Bulgarians head. In his first two seasons at Old Trafford, Berbatov was hardly the most popular player at the club scoring 9 league goals in 08/09 and 12 in the 09/10 season and being accused of being a lazy player and not contributing to the team. However this season, after already beating previous records with 20 league goals and being the league’s top scorer you would think his contribution would be noticed and fans begin to notice the 30 year old talents, no? But along came another hero for the United faithful to worship and overshadow Berbatov’s achievements, a man we like to call Chicharito.

Chicharito’s cheeky grin and ability to net a goal no matter what the situation has earned him a lot of fans and deservedly so, after all how can’t you love the little Mexican? His playstyle however, isn’t for everyone, playing on the shoulders of defenders, hoping to beat the offside trap, is a risky business but, this season we have seen it close to perfected by Chicharito but this is not to say it will work against all defences. And in future this may cause problems when the 22 year old comes up against smarter, more experienced defenders. Hernandez has scored his fair share of goals, netting 16 in all competitions, and looks to be a definite star for the future. However, his small 5ft 9 height and slender frame may lead to him having an inability to lead the line and in future lead to difficulty in him playing as a lone striker and not being able to support the team as much as he may like. I think his performances can rely on the strikers and midfielders around him. A play style made famous by Manchester United legend Ole Gunnar Solksjaer.

However, the success of Hernandez has, in many respects, overshadowed Dimitar Berbatov’s overall contribution to the team. In many people’s opinions consistency is lacking in Berbatovs game. However, we have seen little consistency in starts given to Dimitar where it seems Sir Alex bizarrely has opted for an out of form Rooney, leaving only a place on the bench for league’s top scorer. Another argument frequently made when criticising Berbatov is “he doesn’t perform in big games”, this despite him scoring a hat-trick against our biggest rivals Liverpool and playing practically no more big games with the exception of City away where he played as a striker against a ridiculously defensive City team. Dimitar’s ability to kill a ball with his immaculate touch and cut open a defence with an exquisite pass as well as score goals is reminiscent of one Eric Cantona. One thing that is completely dissimilar to Eric Cantona is Dimitar’s attitude. Despite being left on the bench Berbatov has behaved impeccably, not once using an interview to complain about his lack of match time though his attitude is often portrayed badly by the media.

Now don’t get me wrong, I love “the little pea” as much as the next man but I feel our £30 million Bulgarian receives a lot of un warranted criticism from United fans and others despite Dimitars overwhelming contribution this season. While I accept that Chicharito has a lot of growing and developing to do at his young age, I think in the immediate future Berbatov will be more integral to success due to his immense first touch, his ability to pick a pass and his eye for goal and these characteristics is what, for me, make Berbatov the superior striker.

One response to “Who would you choose, Berbatov or Chicharito?”