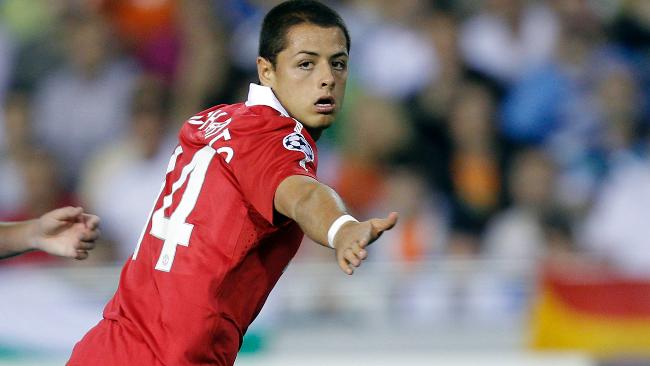 As Javier Hernandez notched a brace in Mexico’s 3-1 win over Paraguay last night the young strikers stock rose once again. Chicharito’s potential has been evident from the off but so far this season has by and large played the super sub role to maximum affect, however it’s evident to all that he is going to be much more than that and this could just be the start of a very special career.

Sir Alex continues to state that there is no value in the market, whether you agree with this or not if he can continue to sign such astute purchases as Chicharito then the club will definitely be moving in the right direction. It’s hard to believe now though but in 2009 the Mexican star considered quitting football all together.

“I thought about retiring because I felt stuck there, every week would pass and my name would not be on the list for the game. I was not injured and was playing well in training, but I got nothing from the coach.”

“I had so much confidence but as the weeks passed me by it all just drained out of my body and mind. It was so painful.”

Thankfully though he carried on and his hard work paid off as he began to play and score freely for Chivas netting twenty goals in twenty eight appearances in 2009/10, a sign of things to come. This in itself shows the character of the man, not many young players would have the persistence to keep at it rather than to give up or move on. Ultimately it was the dream of playing at the world cup that drove him on and unbeknownst him his rapid progression was being watched by Jim Lawlor, United’s chief scout.

Satisfied that Hernandez had potential United swooped and secure his signature in April of last year, now most United fans welcome the signing of young talent as it is a strong tradition that the club is built on but a seven million pound unknown Mexican was probably not the marquee signing that the fans were after. However the supporters didn’t have the extensive knowledge of the player that United’s back room staff had gathered, but knowledge isn’t everything; look at Kleberson, Liam Miller and Eric Djemba-Djemba all looked to have the potential to play for Manchester United, all never fulfilled it.

Hernandez’s performances in the World Cup suggested something different however, his searing pace was immediately eye catching and his enthusiasm for the game exceptional. Often when I watch a player United have signed or are rumoured to be signing you see attributes that don’t exist purely because you want them to be good, however with Chicharito the talent was definitely there. Admittedly no one got too carried away but the feeling was that he had shown he could handle the world cup therefore surely his chances of making it at United had risen. Again this is not always the case, Karel Poborsky and Juan Sebastian Veron both shone on the international stage but couldn’t handle the pace of the Premier League. The amount of if buts and maybe’s surrounding an arrival of essentially an unknown quantity to Old Trafford are endless which further add to incredelous rise of Hernandez.

He is now United’s second top goal scorer on sixteen goals in thirty-six appearances, this stat becomes more impressive when you consider he has only started eighteen times, his international record is equally impressive with thirteen in twenty-two. But it’s not just his goals; it’s the way he gets them, his on the pitch demeanour, his passion. I was recently speaking to a friend of mine who is an Evertonian, I suggested that Chicharito was by far the signing of the season he disagreed and felt Spurs Rafael Van Der Vaart trumped him. He may well have a point, at a mere eight million the Dutchman has been a fine acquisition to the Spurs engine room, he’s also made them a European force and I would be a liar if I said I’m glad Sir Alex didn’t try to sign him. However consider it this way, Van Der Vaart is now an experience professional who has played in the elite European leagues for nigh on ten years, he is a seasoned international and was surely expected to adapt almost immediately. Javier Hernandez on the other hand is a young lad still learning his trade he has also come from the Mexican league which is simply nowhere near the level of the Premier League. It took him two months to become accustomed to the pace and the physical demands and hasn’t looked back since, I’ve already showed you his goal stats and for a first season and they are impressive enough but the fact he still continues to score regularly despite irregular starts adds another notch to his bow. It’s often under estimated how hard coming off the bench can be, attempting to change a game a lot of players can’t do it but Chicharito has no such qualms. He watches the game and analyses how he could impact the, just like a certain Mr. Solskjaer used to do.

Another thing my Evertonian friend suggested was that Hernandez was a nasty piece of work on the pitch but gets away with it because he has a baby face. Now this I disagree with, you can’t knock his disciplinary record with four yellow cards, however the young Mexican isn’t afraid to get stuck in. This isn’t nastiness though this is bite, it’s a trait from the Americas which is something that the fans love, Heinze, Tevez and both the Da Silvas have got it and their passion is a huge asset. However it’s not just at United, look at the impact David Luiz has had at Stamford Bridge, but for me it’s Hernandez has the whole package.

The more you look at his rise to power the more you have to shake your head in disbelief, the amount of things in his way probably add up to the goals he scored in a red shirt however he has over come them with a smile and a lot of hard work. Chicharito looks set to hit the twenty goal mark this season which would be a fantastic achievement and surely put him in the reckoning for young player of the year. However whatever happens between now and the end of the season for Hernandez could be minimal compared to what he could do in the years ahead of him.

Chicharito was speaking to the News of the World.