Manchester United’s highly-rated winger, Luis Nani, doesn’t think he gets enough freedom from Sir Alex Ferguson to express himself on the pitch. When Cristiano Ronaldo first joined United back in 2003, he couldn’t go on a run without doing a number of step-overs and I’ll admit that I enjoyed it at times but it’s very annoying when you see a player overdo it.

Nani having his most consistent season yet.

But with the help from Ferguson, Nani is topping the Premier League assist charts after creating 16 goals (so far) for his teammates and he’s made himself a regular in United’s starting eleven – he’s not a street striker anymore! Nani has also scored nine goals this season, which isn’t a bad number for a midfielder.

“I try to enjoy playing now, but it is not always possible because I have a responsibility to the team.

“But something of the street remains in me. It is not easy to show at United because Sir Alex does not allow very much freedom and I cannot do the tricks and things I did with my friends.

“But when the game is under control I take a risk and it makes me very happy if things work out.”

Call me old fashioned but I prefer players like Valencia, that use their speed effectively instead of slowing down the attack ‘showboating’. However, it’s fine when your 4-0 up, but when you’re trying to grab a winning goal in the dieing minutes, it’s important you to do the basics and try not to forget that football is a team game!

I’m not writing this to throw a dig at Nani but to educate young prospect footballers in hope that they understand that you can also stand out by doing the simple things in football, like short one-two’s and keeping possession. I was once a young player, a successful one winning national competitions but I often sat on the bench watching the rest. I used to ask why and the answer was that I needed to focus on doing the simple things before attempting anything else because it’s only a risk for teams that are competing for trophy – look at Fabregas’ back-heel against Barcelona in the Champions League, that left the 23-year-old and Arsenal Football Club in disgust as the ball was intercepted by Iniesta, who played a super through ball to Lionel Messi who finished with a touch of class. Wasn’t so Fab, was it?

Last night I spoke to Stretford-end on twitter and discussed footballers that influenced me growing up as a youth, players like George Best, Diego Maradona and Mane Garrincha, Brazil’s forgotten hero. However, Garrincha never listened to tactics or whatever the manager had to say, he was just gifted and proved that by winning the World Cup for Brazil in 1962 without any help from Pele, who got injured at an early stage of the competition.

I’m not for one second comparing Nani to the greatest players to ever play the beautiful game because he isn’t one. Ryan Giggs doesn’t have the right to ignore Ferguson’s commands, he respects them and that’s why he is one of the most respected players to wear the red shirt.

If Nani has plans to become a legend at Manchester United, he’ll have to listen to Ferguson, the same man that made Paul Scholes, Wayne Rooney, Cristiano Ronaldo and many more!

One response to “Nani has a lot to learn before he can do whatever he likes on the pitch!” 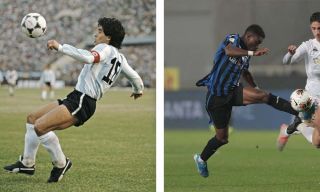