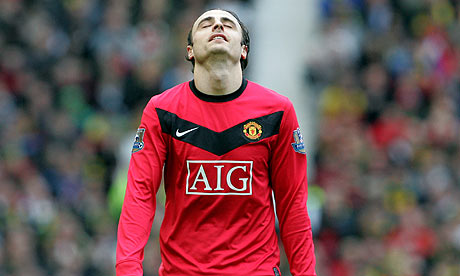 For the second match in a row the Rooney-Hernandez partnership flourished on the big stage. The two linked up brilliantly as United scraped past Marseille by two goals to one which saw them safely through to the quarter finals. But where does this leave the clubs top scorer Dimitar Berbatov?

As Javier Hernandez notched his second goal of the evening against the French champions, capping a brilliant performance, the television cameras showed the united bench celebrating gleefully, all of them but Dimitar Berbatov. Although the big Bulgarian stood to applaud the goal his body language was that of a person who wanted to be scoring the goal, rather than watching it.

Many would sympathise with him of course, surely any other striker at a top European club who had scored nineteen goals would be an automatic starter for big Champions League games. Not so, for the second time in four days and for the second “big” game on the trot the young Mexican Chicharito was preferred to Berbatov. However this is not a rare occurrence in Dimitars United career, during his time with the Old Trafford club the Bulgarian has only started twenty-nine out of sixty-three games in the Champions League and against our title rivals (who I have deemed to be Tottenham, Liverpool, City, Arsenal and Chelsea) not pretty reading for a thirty million pound striker. He has however appeared in fourth-three of them but this still begs the question why is he not starting more often? Particularly this season when you consider his virtuoso performances against Liverpool, Blackburn and Birmingham, not only his goals but his ability to be the link man and let the play flow through him is incomparable and the reason why we bought him in the first place. So far this season he has a 45% start rate out of the said games, his best appearance record in these games funnily enough came in his first season when United had stronger attacking outlets in messrs Tevez and Ronaldo, his second season was his worst with only a 30% start rate, this however was surely understandable with Wayne Rooney’s form as the lone striker.

This season however bears the biggest question mark, with Rooney out of sorts Berbatov has stepped up from the periphery of being an expensive luxury player to being the main man. However in the last two weeks United have played Chelsea away, Liverpool away and Arsenal and Marseille at home, Berbatov has started one and came off the bench in another two. These stats produce another theory that Berba doesn’t shine in the big games, well I’m sure there would be plenty who would agree with that statement but I’m not so sure. In the ten games he has started, he has scored three (albeit all of them coming in the one game) and United have won five and drawn three, not a bad record. Maybe then it is because his form as dropped in recent weeks and I believe this to be a credible argument. He has not scored a goal since January in the brilliant comeback against Blackpool at Bloomfield road; Berbatov desperately needs a goal as he is the archetypal confidence player. Every player relies on confidence but some more than others and Berbatov comes under that category. He possibly needs to release himself from the mind-set that if he isn’t scoring or creating goals then he is of no use to the team, this of course is not true. He may have gone off the boil in recent weeks however but this does not explain why he was benched against Arsenal at home earlier in the season when he was at the peak of his power. Because of this I have culminated my own conclusions for Dimitars erratic appearance record in the big games.

I’ve analysed the squads he’s been in season by season and his performances but Dimitar, it’s nothing personal! Rotation is part of playing for Manchester United, the boss picks the squad he feels is most suited to defeating the opponent on that day, often he will pack the midfield leaving room for one striker, which has to be Rooney. You might think this to be a bold statement about a striker who has been out of sorts to say the least this season but Wayne is a world class player, regardless of his form we know what he can produce. United have always had a player who starts, whatever the weather, Cantona, Keane and Ronaldo, I could go on, I’m going off topic here though. Of late the manager has gone with a different style of striker like at Stamford Bridge where he played the sprightly Hernandez who likes to run in behind the defence against Terry and Luiz who like to get stuck in to their opponents and would have preferred to play against Berbatov. Within the past week Hernandez and Rooney have flourished together scoring a combined eight goals in ten, they have looked lethal together with Wayne dropping deep dictating the play and looking to pick out the Little Pea who plays like a young Michael Owen or Ole Gunnar Solskjaer. It would be stupid to drop these two at the minute and I would not be surprised to see the same pairing start the weekend game against Bolton, but make no mistake Berbatov will play a part this season.

In his first season Dimitar forced Carlos Tevez out of Old Trafford, not content with playing the rotation game the moody Argentine plumped to go to City. Dimitar however knows what is required at a big club like United, he knows he won’t play every game but has to be ready when called upon. On my way home from Old Trafford on Tuesday night some talk on the radio focussed on whether Berbatovs days were numbered at United, these people have short memories. The clubs greatest achievement came when we had four fantastic strikers in Andy Cole, Dwight Yorke, Teddy Sheringham and the aforementioned Solskjaer, all content to play the waiting game, all ready when the managers call came. Big squads win trophies; fact and it would be churlish for any fan to suggest getting rid of Berbatov.

I mentioned earlier in this article that Berbatov hardly went overboard in his celebrations of Hernandez’s second goal, but this shows his hunger and desire to be on the pitch and he will be a massive asset to the Reds as the games come thick and fast.