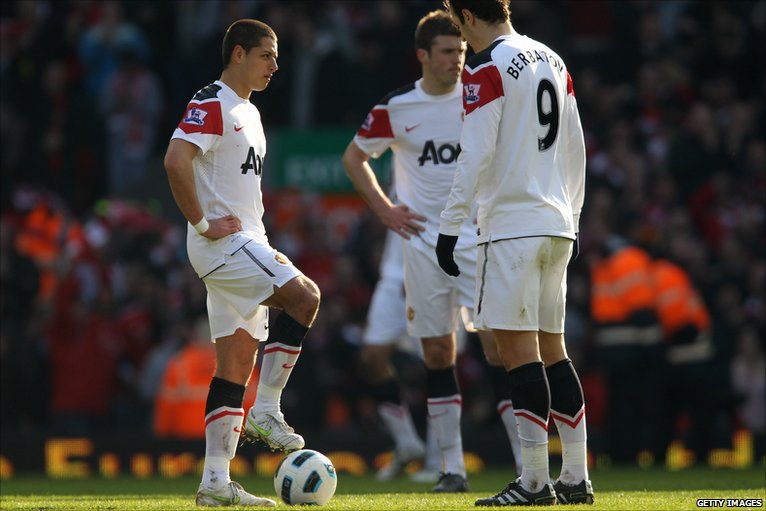 After a tough week it’s time for United to regroup and show their mettle. Teams that win titles have bucket loads of character and United’s will be sternly tested over the coming weeks.

It’s difficult to take many positives from the last week in the world of Manchester United, particularly from the debacle at Anfield on Sunday.  Positives can surely be taken from the defeat at Stamford Bridge just a few days prior to our clash with the Merseysiders; the Reds bossed the first half and would surely have emerged victorious had a number of controversial refereeing decisions gone our way. The fact remains though that United’s poor form away from home continues and HAS to improve if the Reds are going to land an unprecedented nineteenth league title. Two bad defeats against teams we’d rather not lose to they were; but there is no point dwelling on the whys and wherefores we must forget and move on.

Not surprisingly two defeats on the spin have reopened the whole “United’s squad is poor and needs an urgent influx of new talent” debate. Whether or not you agree with this is, at the moment, irrelevant as we must concentrate on the short term. Discussing changes to United’s squad is for another day, however whilst we are on the subject I do believe that although this is probably not the strongest squad Sir Alex has had in his 24 year tenure at Old Trafford it is certainly not the worst and gets far too much flack in my opinion. However like I said that is for another day.

In the meantime it is important to assess United’s situation sensibly, three away games on the spin at any level is difficult but when two of them are against Chelsea and Liverpool they become even more tricky. So, bearing in mind we were only poor in one of those three games there is still plenty to be optimistic about but it would be churlish of me to view United’s form away from home as anywhere near good enough, we know that, the players know that. Despite this the Reds are only fifth in the Premier League away form table but I suspect this is more of a reflection of how poor the rest of the Leagues teams are on their travels rather than how good United are.

It might not be clicking on the road but it certainly is at Old Trafford. Thirteen wins, a draw and no defeats is the form of Champions, however this ultimately makes it more frustrating as to why the Reds can’t replicate this when they play away, baffling. Surely if United had played anywhere near like they are doing at Old Trafford at places like Villa Park, Craven Cottage even Anfield we would be home and hosed, but the fact is we aren’t and the Premier League title race is very much open. Fortunately though United now have a chance to indulge on some home comforts with three crucial games played consecutively at the Old Trafford. Firstly a mouth-watering FA Cup tie with the Gooners, quickly followed by the second leg of our Champions League last sixteen tie against Marseille and finally a potentially tricky encounter with Bolton Wanderers. Win all three and the momentum is back, the positive vibe returns and everyone is buzzing again. Anything less could see a large dent slammed into the Reds hopes for silverware this season. The forth coming week is probably more important than the last.

United should be bolstered though by the return of a number of key players. Nemanja Vidic has now served his one match ban and Ferdinand, Park and Valencia could all be available for Saturday’s FA Cup quarter final. It is also hoped that Nani should be fit sooner rather than later after being on the end of a Jamie Carragher horror tackle against Liverpool on Sunday. The winger posted on his twitter account that “he hopes to back fit and playing very soon”. All could be massively important for United’s title run in but specifically I think that the reunion of the Ferdinand-Vidic partnership could be pivotal. Chris Smalling has coped admirably in the absence of first Rio then later Vida but the latter two have more than just fantastic ability they have an almost telepathic understanding, not just with themselves but with their goalkeeper and their wing-backs. The statistics prove my theory: this season, when Ferdinand and Vidic play together United concede on average 0.64 goals per game and keep a clean sheet 50% of the. This differs when one of them doesn’t feature as United concede on average 1.37 goals per game. Together they provide a solid bed rock for the victories to be achieved, bedrock which will be desperately needed, starting on Saturday

One response to “Crucial times lie ahead for struggling United”