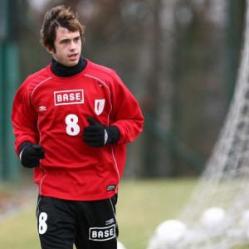 Recent reports have suggested, Ajax are planning to take Standard Liege midfielder, Steven Defour, from the finger tips of Manchester United, who have been strongly linked with the player for that past 2+ years.

Ferguson wrote the Belgian footballer a letter after he suffered a long-term injury a year or two ago, wishing him well. The last time Fergie wrote a player a letter like this, it was sent to Ruud van Nistelrooy, who joined Manchester United from PSV Eindhoven a year later.

After watching last nights game against Olympique Marseille, Steven Defour came to my mind, a midfielder who is familiar with scoring goals just like Paul Scholes was in his early years – we need a creative midfielder, we failed to find that killer pass last night that probably would have given us an away goal, putting us in a much better position going back to the Theatre of Dreams on the 15th of March.

Defour has been on Ferguson’s radar for sometime now, however, a number of different clubs have showed interest, including Liverpool, Real Madrid, Arsenal, Everton and Sevilla, so if the attacking midfielder makes the decision to move from Standard Liege this summer, we’re going to have a fight on our hands if Ferguson is still interested – but I’m sure he will be, looking at how bad some of our midfielders have been performing this season.

Sir Alex Ferguson has been monitoring the star’s progress closely throughout the years and it’s now expected that a move will be made sometime during the summer, however, a few sources in Ajax claim the club are also ready to come in and rival United for the 22-year old.