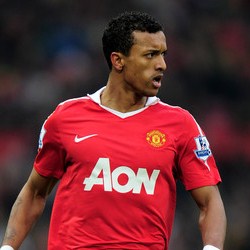 The Portuguese star became the second Manchester United player to join the social network, Twitter, during the weekend after being introduced by fellow team-mate, Rio Ferdinand – From reading Nani’s tweets, it’s quite obvious he finds the English language difficult, but I’m delighted that hasn’t stopped him getting social with the greatest fans in the world, who are only delighted to hear more from him!

Fergie will never forget how Ronaldo lit up United’s 2008 campaign, scoring over 40 goals which is unbelievable for a midfielder, however, I believe Nani became trapped in his shadow and some fans still expect the same quality from him, that’s unfair if you ask me…

This season, Nani has became far more consistent, hitting double figures on the score sheet and setting up a number of goals helping Manchester United stay top of the Premier League table, fingers crossed for that 19th title!

“He has been fantastic this season. He has scored goals and created them. He has made an amazing contribution.

Nani was older than Cristiano was when he came to us.

But Cristiano went on to become the best player in the world. The challenge for any player is to improve as much as that.

Nani is showing signs of it at the moment.”

One response to “Ferguson Happy With Nani’s Progress”