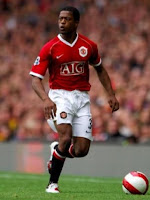 French left back Patrice Evra has ended speculation regarding his future by putting pen to paper in a deal that will keep him at Old Trafford until 2014.

Evra, 29, has been a central part of Manchester United’s success in recent years and is adamant he wants even more silverware.

He told manutd.com: “Ever since I arrived at United, it’s been a dream come true playing here. ”The fans, the players, the manager and the staff all work hard to make this club the best in the world. I have won a lot in the last five years, but I want to win more and I know that’s the mentality of everyone here.”

Evra has established himself as a firm fan favourite and this news will delight all Manchester United fans as the services of one of the world’s best left backs are secured.

Sir Alex Ferguson spoke of his delight at the news:  ”Patrice is unquestionably one of the world’s best left-backs. He has developed into a key character in the dressing room and it is great that he has committed himself to the club. His experience and skill will be increasingly important to us.”