This is, indeed, my first post on StrettyNews.com, and it’s great to be here. Equally, it’s the first time in a very, VERY long time I’ve felt extremely disappointed as a United fan.

Losing 2-1 to Wolves this evening wasn’t even why. We deserved to lose – even a draw would have been a very unfair result on Wolves. They had all the possession, all the attacks, and they certainly had the hunger to win the game. Whereas, United certainly didn’t. 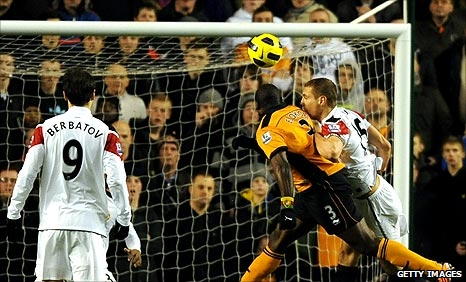 Elokobi puts the ball in the back of the United's net

I reckon we went into the game expecting a win, which is always a recipe for disaster. Remember the game against ‘minnows’ Burnley last season? A Robbie Blake volley stuns United, and the world’s media, and suddenly United are written off as title contenders, and not going to win anything this season. We ran Chelsea close last season, and still sit proudly atop the Premier League table this season. But now, by 4 points, and not the 5 that we had.

But that was why I was disappointed. I felt gutted coming home today from London, having followed the game in various pubs and sports bars. We’ve demolished teams this season, and having actually fielded a full-strength team, I think we all should rightfully feel a bit aggrieved. What was Fergie’s team talk like at half time? Why weren’t subs made earlier? Why did we roll over, and let Wolves take the win so easily? These are all questions we have to ask ourselves before next Sunday when it’s Derby Day.

Ah yes, Derby Day. If there wasn’t a better reason to go out and prove we can win the title for the 19th time. Can we do it?

Of course we can – we’re Manchester United.