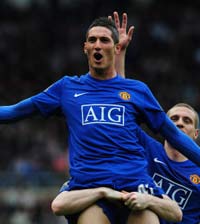 It has been confirmed in the last few hours that, Federico Macheda will join Serie A club Sampdoria, until the end of the season.

I personally thought a loan spell to another Premier League club would of been a better option, looking at how well it has worked for Danny Welbeck, Tom Cleverley and Mame Biram Diouf.

Maybe a club like Everton, who have been struggling to find goals relying on Tim Cahil who is now away attending that Asian Cup.

I am very happy that Macheda has chosen Sampdoria and I think it’s the same for the fans. Macheda has easily filled the void left by Cassano, he will definitely do well. In these five months we will try to treat him well. With him here, the enthusiasm has increased tenfold.

Sampdoria who only won 5 games out of 16 are currently sitting in 8th just behind Serie A Champions, Internazionale.