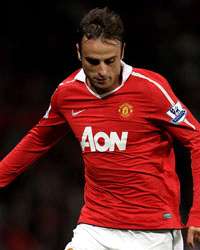 The night started with Ferguson naming Darron Gibson in his starting eleven replacing Ji-Sung Park who has left the squad to join South Korea in the Asian Cup. The majority of Manchester United fans weren’t too pleased with the Scot’s decision in naming the Irish midfielder, but I believe every player deserves their chance, look how well it worked with Nani and Anderson!

Wayne Rooney again attempted some long range shooting but it didn’t succeed in frighting the Birmingham goalkeeper, Ben Foster. Wazza wasn’t at the races tonight unfortunately, ever since he came back from the injury he has been getting involved a lot more than he did tonight. Ben Foster who left United last summer for an initial fee of £4 million, pulled of one amazing save from one of Ryan Giggs’s crosses which was very close to hitting the back of Birmingham’s net.

Dimitar Berbatov opened the scoring on the 59th minute. The goal came from Berbatov’s brilliant flick that fell to Gibson playing a one-two with the Bulgarian who put the ball past Ben Foster and in Birmingham’s net. This improved the atmosphere of the game and Birmingham City were immediately put on the back foot.

Lee Bowyer scored a controversial equalizer on the 89th minute, not only was Bowyer offside but Nikola Zigic handled the ball also.

Manchester United now go into the year 2011 on top of the Premier League table having a better goal difference than rivals, Manchester City.