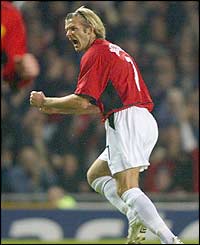 David Beckham, speaking to Oliver Kay of The Times has hinted at a return to English football and perhaps a return to his first club, Manchester United. When asked about a return to English football, David said “I am not holding my breath on that one, but we’ll have to wait and see”. These comments sparked a lot of speculation in the press and on the web, particularly twitter where there has been has been a cry from Manchester United fans for David to return to Old Trafford, many tweeters encouraging their followers to use the hashtag #bringBeckhamhome. I asked my followers to get involved by tweeting me plus points and negative points to David’s return.

Plus points:
• Creativity: Creativity is lacking in the team right now with the absence of Valencia; Beckham could be the perfect cure for this, with exquisite crosses and amazing dribbling.

• Cover: Cover is needed in a wide midfield position right now with an unknown date for Valencia’s return and Ji sung Park on international duty, Beckham would be an ideal replacement in the event of an Injury to Giggs or Nani.

• Set pieces and crossing: As of late, with Valencia out injured and Giggs not getting game time after his injury, our set pieces have been lacking, Beckham is well known for his amazing free kicks and crosses and his contribution in that department would be welcomed gladly by the Man United fans and management team.

Negative points:
• Huge wage demands: Coming from LA Galaxy, where it has been reported he is receiving insane wages. In our current financial state, our money would be spent better in other areas.

• Stamina: At 35 years old, fatigue would be a major problem for Beckham in the fast pace of the premier league. I, for one, would be surprised to see Beckham last a full 90 minutes of a premier league no matter what the opposition.

• Media circus: With his lavish lifestyle Beckham is perfect prey for the press. Sir Alex’s relationship with the press is no secret and we have already seen what they can do to a players form with Rooney earlier this year.

Thanks to all my followers for getting involved, with a special thanks to Shaun Birch, Cole Trickle, and Chris Johnson, be sure to follow them on twitter.

Please leave your opinion’s in the comment section below.