On Ferguson’s 24th anniversary being in the Manchester United hot seat he would of wanted his men playing a lot better then what they did.

The game started as a nightmare when Owen Hargreaves wobbled off after 6 minutes holding his left hamstring. Everyone was delighted and shocked before kick off when it was announced that he would be starting for the first time in 2 years.

The performance didn’t look to convincing with Wolves having the majority of chances in the first half. The main thing which let us down was our passing, Bébe gave in a cross at one stage and the ball boys were lucky they didn’t have to exit the ground in search for the ball.

Obertan and Bébe didn’t have the best of games today but there is definitely something about them which looks promising. Both of them are strong physically and have the speed of lightning which is always an advantage.

On the 45th minute Fletcher seen a gap in the Wolves defence and fed Park with a pin-point ball and a deadly finish soon followed. I love seen Park score because he always gives 110% whenever he plays, a real role model.

Manchester United schoolboy Ebanks-Blake made it 1-1 on the 66th minute, this gave the game a twist and made the rest of it more interesting even though I wasn’t very happy we let another lead slip.

With four minutes being added ‘The Reds’ started the push and who else but Park got the winner. Fletcher again feeding Park with a superb ball leaving the South Korean running across goal and putting the ball past Wolves goalkeeper, Marcus Hahnemann.

We’re still to see a classic Manchester United attacking style performance this season but at least we’re are to winning ways. 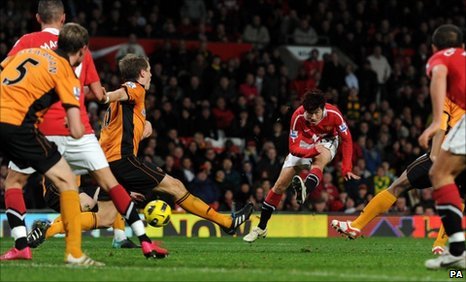