English manager Fabio Capello reckons that striker Wayne Rooney will find his goal scoring form again but maybe not till the beginning of September. Rooney didn’t score for Manchester United since they took on Bayern Munich last March but you have to remember he was out for some time with an injury. I don’t understand why everyone has the spot light on Rooney being honest, ok he didn’t score over in South Africa but did he get the chance to? The whole English team were dreadful and it has to be a Manchester United player to get the blame for it hasn’t it. That is total crap if you ask me, if I was the blame anyone it would of been John Terry. John Terry is nothing but trouble and loves to be in the frame of it all. He’s not England’s answer to success and never will be. England would be far much better of without him. I think Capello needs to sort this out soon if he wants to keep that job.

I’m not a fan of England maybe because I’m a passionate Manchester United fan but I still watch them and believe they could of been a success in South Africa. But its not as easy as that, Capello should of included some players in which he didn’t. The likes of Gary Cahill, Ashley Young and many more but I don’t want to take up this post making a list because this is a Manchester United blog after all.

But enough of England’s nightmare of a World Cup, they now have to prepare for the UEFA EURO 2012 qualifying campaign.

Capello went on to say:

“I expect Wayne Rooney to have a good season but he needs to play,”. I studied him, along with a number of other players, for three years when I was a club manager, working out how long you needed to find normal form. It was 500 to 600 minutes minimum. At the moment he has played 150. For this reason I think he needs to play a minimum of three more games to find his correct level.”

Reading this you get the feeling that Capello believes there is more to come from our number 10. Being honest I don’t care if he scores or not for England but its very important he gets back to scoring ways for Manchester United. Manchester United are a better team then England anyway so of coarse he is going to enjoy playing for us more. Plus seeing him singing Man Utd chants on a night out he must be impressed by our fans too!

But at least this year if were playing the likes of Chelsea the following week we can stick Hernandez up front because judging him so far he’ll score if he gets half the chance. The strength in our squad now is something to be very proud of, all the youth are starting to play the United way. But I still believe we might need a replacement for Paul Scholes when he decides to retire.

Monday night we take on Newcastle United which I expect Wazza to feature in. I think its very important Rooney and Berbatov hit the net early in the season, the pair need a boost and what better way of doing it then scoring a few goals. I still believe that there is a lot more to come from Berbatov but I’m sure we’ll see later this season. 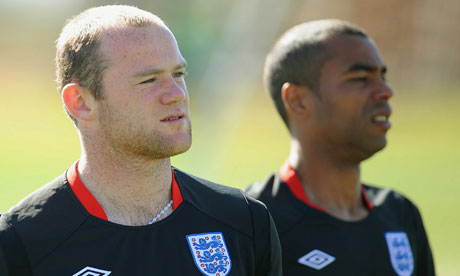