Werder Bremen have now confirmed that Mesut Ozil could leave the club this summer, with reports of Barcelona interested in snapping up the German midfielder. A Spanish radio reported on Tuesday that Barcelona reached an agreement to sign Ozil.

As we said the other day Ferguson was present at Fulham’s friendly against Werder Bremen to watch Ozil. Its also reported the asking price of Ozil is 12 million but come on, that would be great business to get a player of his quality for that much. But I just had a thought, would Ozil of played in the World Cup if Ballack wasn’t injured? I’m not saying for a second that Ballack is better but he is the German captain!

Klaus Allofs Bremen’s director of sport admins that Ozil could leave the Bundesliga side.

Klaus Allofs said: “It is possible that there is now a bit of movement in the issue,”

“But I am not running backwards and forwards to the fax machine or getting sweaty palms when I check my emails to see if maybe an offer has arrived.”

If the German club don’t sell the midfielder soon they will be running risk of losing him on a free transfer next year because he turned down a new contact already! But maybe Ferguson told him the other day that if you wait till next year you can have the red shirt and get higher wages.

I can understand why many Manchester United fans will be feeling a bit let down but look “We’ll never die” and when was the last time Ferguson let us down? I believe in Ferguson!! 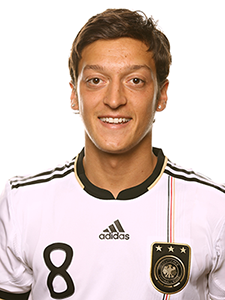