Manchester are currently leading in the race to sign German star Mezut Ozil with them being odds-on to sign the playmaker who had a great world cup. Manchester City, Chelsea, Real Madrid, Arsenal and Barcelona are some of the clubs that are said to be after Ozil too but its said that Werder Bremem are waiting on an offer from the red devils before they sell.

David Gill Manchester United’s chief executive revealed earlier this week that Sir Alex Ferguson has the money to spend before the window closes. Ever since rivals Arsenal moved into the emirates stadium their chief executive Ivan Gazidis has came out every year saying Arsene Wenger has the money to spend. So is Gill starting that crap? Personally I don’t like it because its going to start making Ferguson look bad and I have already been asked been a few fans “Do you think Fergie is supporting the Glazers?”. To be honest I think if Ferguson ever had to come out and say something that wasn’t true that would hurt the fans id say that he would stand down. He’s not like Gill, Ferguson loves United!

Werder Bremen are asking for what is reported to be £12 million. When I herd that I was saying to myself that would be one of the best deals in the history of football after the world cup he had.

Manchester City are thought to be moving for James Milner before going for Ozil which I find absolutely madness. It shows that Manchester City have more money then brains. 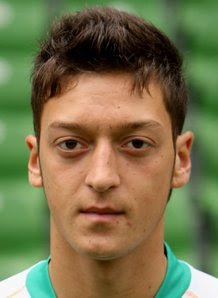