The new Manchester United home kit is ready, were going retro with the collar which hasn’t been on our jersey since Nike became the official Manchester United kit suppliers. Many Manchester United fans have said that they are ready to “boycott” the new home kit and wear the older jerseys instead. To be honest I think that’s crap, because I support Manchester United no matter what and I wear the jersey with pride so I don’t see why I shouldn’t buy the new kit. I don’t want to hand the Glazers anymore money but buying a jersey which I have done year in year out is something I wont be giving up.Aon, Manchester United’s new club sponsor (replacing AIG) have their logo placed on the front of the shirt. 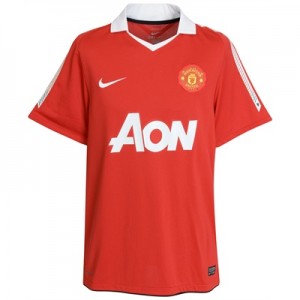