At the end of last week many blogger’s including myself seen that John Sweeney’ book, Rooney’s Gold was being sold on the Manchester United website. The author of this book recently presented Panorama documentary which showed all the debts which the Glazers had not only with Manchester United but with every business they own in the USA!

The book looks back on what sort of life Rooney had for example getting with prostitutes and an unsettled marriage with Coleen.

I know Rooney wasn’t happy about the book before the World Cup when someone mentioned it but then why would Manchester United see it in the online store? I don’t really get it being honest, what would Rooney do if he seen it? I hope he see’s this and finds the ape that uploaded it. 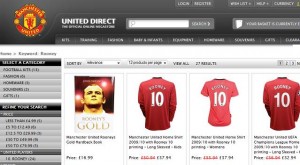